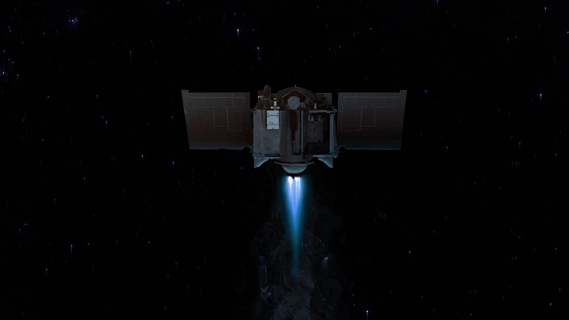 The University of Arizona mission to bring back a sample from an asteroid fired its main engine in space for the first time Wednesday.

The deep-space maneuver will direct OSIRIS-REx back toward Earth from its solar orbit.

Mission scientists tweeted that the spacecraft is now on course for an Earth flyby in September. The spacecraft will use Earth’s gravity to sling it toward the asteroid called Bennu. OSIRIS-REx has been orbiting the sun since its launch in September.

The spacecraft will reach the asteroid in 2018 and spend two years orbiting before inching toward the surface to grab a rocky sample. The sample will be brought to Earth in 2023.

In a news release, NASA said mission engineers are studying data about the maneuver as it's being transmitted to them from the spacecraft. It takes about 10 minutes for data to travel the 56 million miles from the spacecraft's current location to a network of radio telescopes located around the globe.

Dwarf Planet Ceres Up To 30 Percent Water, Study Says On Way to Bennu, OSIRIS-REx Looks for 'Trojan' Asteroids OSIRIS-REx Spacecraft, Instruments Healthy
By posting comments, you agree to our
AZPM encourages comments, but comments that contain profanity, unrelated information, threats, libel, defamatory statements, obscenities, pornography or that violate the law are not allowed. Comments that promote commercial products or services are not allowed. Comments in violation of this policy will be removed. Continued posting of comments that violate this policy will result in the commenter being banned from the site.