University of Arizona scientists are using a sophisticated camera aboard the Mars Reconnaissance Orbiter to document fresh meteor strikes, not unlike the one that hit Siberia last month.

The High Resolution Imaging Science Experiment camera, known as HiRISE, snaps photos of the pockmarked Martian surface containing 1 billion pixels. Each pixel covers about 1 square foot of the planet’s surface, which has an area of almost 56 million square miles. 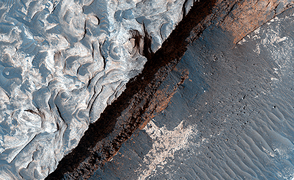 The latest photos are repeats of places earlier photographed, and they are showing new meteor activity.

“We’ve imaged more than 250 new impact sites," says Alfred McEwen, principal investigator for the HiRISE mission. "That means there are before and after images showing that the impact occurred sometime between the two images.

"Mars has been influenced by cratering throughout its history. If you go back in time, there are more of them and bigger impacts. The large impacts can have very dramatic effects.”

These discoveries are particularly timely given the meteor strike in Chelyabinsk, Russia on Feb. 15, McEwen says.

“The recent event in Russia is an example of one that did mostly explode in the atmosphere but with some spectacular effects and with some pieces making it to the ground," he says. "If that had been Mars atmosphere that it went through instead of Earth’s, it would have made a substantial crater or maybe a cluster of craters.”

Watch NOVA Wednesday, 8 p.m. on PBS 6, for a report on the February meteor strike that hit Siberia.

What Happened To Mars' Atmosphere? Mystery Deepens UA Gets NASA OK to Move Ahead with Mission to Asteroid UA Doctorate Student First to Identify Minerals on Mars Surface
By posting comments, you agree to our
AZPM encourages comments, but comments that contain profanity, unrelated information, threats, libel, defamatory statements, obscenities, pornography or that violate the law are not allowed. Comments that promote commercial products or services are not allowed. Comments in violation of this policy will be removed. Continued posting of comments that violate this policy will result in the commenter being banned from the site.