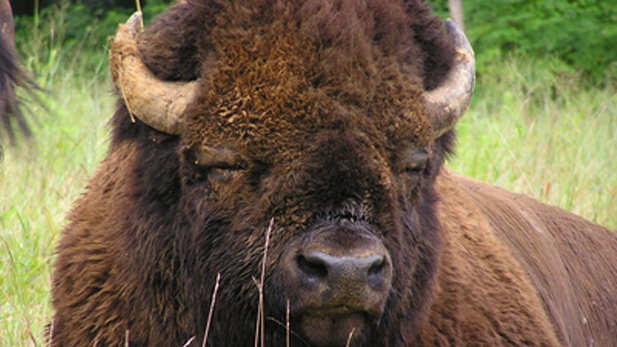 The bison like to wallow or roll around in the dirt, but the 2,000-pound animal leaves small craters. And far from hunters, the herd in the Grand Canyon has tripled in size to about 350 animals.
Public domain

The iconic bison has made Arizona’s Grand Canyon its home. That herd has grown big and is now overgrazing park land, draining already low water holes and trampling archaeological sites.

In the 1800s, settlers killed 50 million bison. They were all but wiped out by uncontrolled hunting. Toward the end of the century, Charles “Buffalo” Jones brought a herd by train to Northern Arizona to breed them with cattle. He called them “cattalo.”

But Jones gave up when the bison wouldn't stay where he wanted them. In 1926, the state brought the herd and allowed them to be hunted. In recent years, that herd has found refuge in Grand Canyon National Park.

"I don't know when this guy came here, but it looks pretty recent because there was moisture this weekend," said Grand Canyon's Martha Hahn, pointing to a hoof print in fresh mud. "The lake is pretty low...typically the water is right up here to the bankside...but the interesting part's going to be where will the bison go when the water's gone."

The park, with the help of students, is researching the impact of the bison on vegetation. They've fenced off some of the long grass next to the lake.

"And then if you look over...on the fenced side...you can see how thick and matted the grass is where they aren't grazing," she said. "And then you can see where it's gone and you just have bare soil. A very big difference. And so the question is, with this bare soil, will anything come back? Most likely not."

And that's the problem. Hahn said damaged vegetation causes a chain reaction that could eventually harm other species, such as the endangered California condor and the Mexican spotted owl.

The bison also like to wallow or roll around in the dirt, but the 2,000-pound animal leaves small craters. And far from hunters, the herd has tripled in size to about 350 animals.

The U.S. National Park Service and other agencies held a recent public meeting in Flagstaff on the bison's future.

Kitty Marr, a mule wrangler on the north rim of the Grand Canyon, has watched the herd multiply over the last two decades.

"I love the buffalo. I think they’re beautiful," she said. "They’re majestic and they’re part of our culture. But they just don’t belong there because they’re destroying our resources. They need to do something before our park turns into a mess."

Marr suggested relocating some and killing other giving the meat to the nearby tribes.

Many sportsmen would like special permission to hunt the animal in the park. Free roaming bison are considered a rare trophy worth big points in private hunting clubs.

"It's pretty unique...it's one of the harder tags to get because the numbers are low for free-ranging huntable bison herds," said Carl Lutch, wildlife program manager for the Arizona Game and Fish Department.

The Arizona Game and Fish charges more to hunt bison than any other animal. It costs $1,000 for a bison tag and $4,000 for non-Arizona residents.

National Park Service officials hope to have a final plan in two years.

Road to Grand Canyon West Now Paved Part of Grand Canyon Bison Herd Recently Moved Bringing the Colorado River Delta Back to Life
By posting comments, you agree to our
AZPM encourages comments, but comments that contain profanity, unrelated information, threats, libel, defamatory statements, obscenities, pornography or that violate the law are not allowed. Comments that promote commercial products or services are not allowed. Comments in violation of this policy will be removed. Continued posting of comments that violate this policy will result in the commenter being banned from the site.