Jac’Que Moore did not know how much help she needed until she left an unhealthy relationship and then tried to restart her life.

While trying to leave the situation, she called an employment program in Tucson four times before she borrowed money to drive from a town in Cochise County to ask for help.

When she got here, the job center connected her with a shelter and resources to find a job and enroll in community college courses. At that point, she was able to look back and realize she’d been at rock bottom, and this was her way up.

This week, the program she turned to get attention from three U.S. Cabinet secretaries, those who oversee Labor, Housing and Urban Development and Veteran’s Affairs.

The secretaries came in the summer heat to laud Pima County’s Sullivan Jackson Employment Center for its efforts to connect veterans with housing and jobs. It, the secretaries said, is one tool they use to work toward a national goal to end veterans’ homelessness by the end of this year.

“They are making the end of veteran homelessness something that is within reach,” said Julián Castro, U.S. Secretary of Housing and Urban Development.

Tucson is one of 25 cities in the country selected to push for this goal, though the president wants all homeless veterans in the country housed this year. The center’s staff have a long history in their work, said Steven Nelson, the center’s program coordinator.

“I’ve been doing this for 25 years. One of my colleagues…has been here longer than I have. We have a wealth of experience and experience counts when you’re dealing with people that have the barriers to employment that people coming here has,” Nelson said. “That’s what makes Tucson and Pima County different.”

The focus on veterans is a point of pride for the staff, Nelson said.

“I can tell you that veterans bring a lot more ability to adapt to a structured lifestyle in looking for work and doing the steps they need in order to get back to a self-sufficient lifestyle, a purposeful life,” Nelson said.

The executive director of the U.S. Interagency Council on Homelessness was with the secretaries when they visited the center, and when they met with people who have used its services.

“The point is, there’s an epidemic” 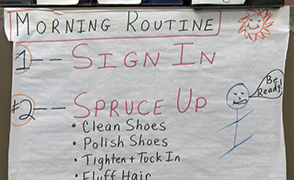 A to-do list greets people using a job center to apply for jobs, practice interviews, and enroll in community college for extra training.
Moore was one of the veterans who spoke with the federal officials while they were in Tucson.

“It’s devastating to a woman to have children and not be able to have housing where she feels safe, where here children can be with her,” she said.

If a person is living on the street, for example, with no professional clothing, “how do you go for a job interview?”

She thanked the secretaries for their attention to the problem, she said.

“This is an epidemic across the country,” Moore said. “They allowed us to say what was on our minds. Sometimes that’s not so good and sometimes that can be very healing for someone to be able to just say it without having to try to structure it or make it sound good.”

Homelessness is a complex problem, often with more than one attributable cause and even can be hard to define. Moore learned she had been homeless before she was living in her car, because she had no control over her housing when she was in her previous relationship.

"Everyone thinks that when you see someone and they’re on the street they want a hand out. Some people just need a hand up,” Moore said. “They’ve fallen, they need a hand up to get back on their feet. I’m a prime example of that.” 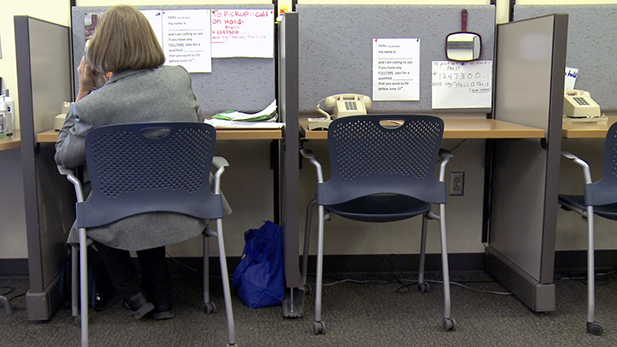 METRO WEEK: Solar Energy Advances in the Southwest METRO WEEK: Evaluating Police-Community Relations Arizona Jobless Rate Falls Again; Workforce Growth Slight
By posting comments, you agree to our
AZPM encourages comments, but comments that contain profanity, unrelated information, threats, libel, defamatory statements, obscenities, pornography or that violate the law are not allowed. Comments that promote commercial products or services are not allowed. Comments in violation of this policy will be removed. Continued posting of comments that violate this policy will result in the commenter being banned from the site.