A-10 Aircraft Could Be Sold to Allied Countries 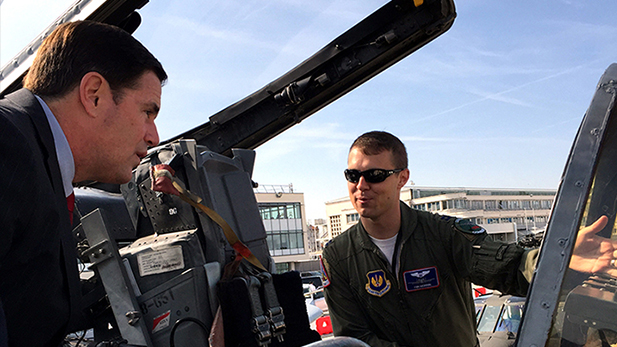 Gov. Doug Ducey meets with an A-10 pilot based at Davis-Monthan Air Force Base during the 2015 Paris Air Show.
Courtesy of the Governor's Office

Officials with Boeing are interested in selling U.S. A-10 airplanes to allied nations if the Pentagon retires the craft.

Boeing officials at the Paris Airshow told Military.com there is some interest in the used planes. The company has a contract through 2017 to refurbish the wings on about half of the A-10 fleet.

The Pentagon is trying to retire the entire 300-plane fleet as a cost-saving measures. Congress has turned that request away three times in recent years.

Davis-Monthan Air Force Base in Tucson houses about 80 of the planes.

Boeing has little actual say in the sale of used military aircraft to foreign countries. A specific office in the Pentagon and the buying country’s embassy handles the practice known as Foreign Military Sales.

In addition to the 300 A-10s in active service, 21 are in storage at the Boneyard in Tucson. Officials there say they have not been contacted about the sale of any of those planes.

Funding for A-10 Assured by Congress for Another Year Sen. McCain: A-10 Will Fly for Another Year Air Force: 10% of D-M's A-10 Going Out of Service
By posting comments, you agree to our
AZPM encourages comments, but comments that contain profanity, unrelated information, threats, libel, defamatory statements, obscenities, pornography or that violate the law are not allowed. Comments that promote commercial products or services are not allowed. Comments in violation of this policy will be removed. Continued posting of comments that violate this policy will result in the commenter being banned from the site.