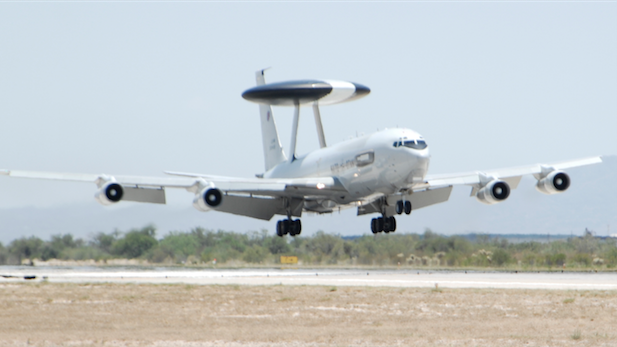 The plane, a modified Boeing 707, has a distinctive dome top filled with high-technology gear making it what the military calls an "Airborne Warning and Control System," allowing it to function as a flying command center and to conduct surveillance.

The plane that arrived in Tucson Tuesday was part of a NATO fleet at an air base in Geilenkirchen, Germany, the Air Force said in a press release.

This is the first ever NATO AWACS to be retired, the press release said. NATO has 16 others.

40 Years Ago Thursday, Last Copter Left Vietnam; Now at Boneyard Stories From the Boneyard Event Provides Rare Glimpse at Military Aircraft 'Boneyard'
By posting comments, you agree to our
AZPM encourages comments, but comments that contain profanity, unrelated information, threats, libel, defamatory statements, obscenities, pornography or that violate the law are not allowed. Comments that promote commercial products or services are not allowed. Comments in violation of this policy will be removed. Continued posting of comments that violate this policy will result in the commenter being banned from the site.