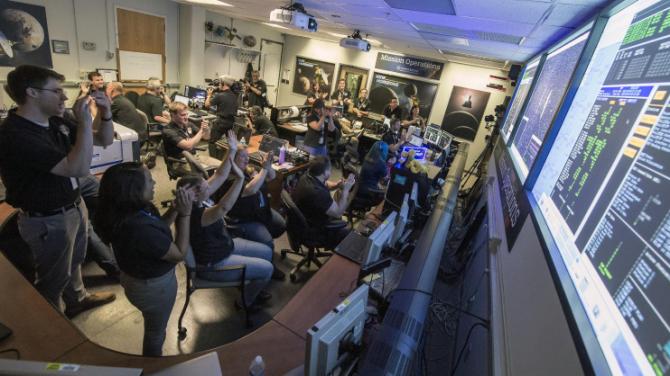 Scientists are taking their first detailed look at photographs and data from Pluto, after the New Horizons spacecraft made the first flyby of the dwarf planet Tuesday.

New Horizons traveled more than 3 billion miles during its nine-year journey, and flew as close as 7,750 miles from Pluto.

Now it's starting the time-consuming task of sending information back to Earth.

Veronica Bray is a University of Arizona researcher on the New Horizons mission team in Laurel, MD. She says the earliest up-close pictures of Pluto are revealing smoother ground than expected, raising the possibility of ice and snow covering its surface.

“As Pluto orbits the sun, it gets closer to it on some parts of its orbit,” Bray said. “We think some of the surface nitrogen ice could sublimate and contribute to the atmosphere. And then at colder points on the orbit, you’ll get more nitrogen snow condensing down onto the surface.”

Bray and other scientists at the mission headquarters are distributing information from New Horizons back to UA and other space science research locations.

Mission planners say New Horizons was designed to gather as much data as quickly as possible during its flyby. That means the spacecraft will return information stored in its onboard memory for a year and a half.

Does 'Planet Nine' Exist? NAU Astronomer Says Maybe Researcher: Part of Pluto Younger Than Thought 'Mind-Boggling:' Pluto Fly-By Reveals Slushy Glaciers
By posting comments, you agree to our
AZPM encourages comments, but comments that contain profanity, unrelated information, threats, libel, defamatory statements, obscenities, pornography or that violate the law are not allowed. Comments that promote commercial products or services are not allowed. Comments in violation of this policy will be removed. Continued posting of comments that violate this policy will result in the commenter being banned from the site.