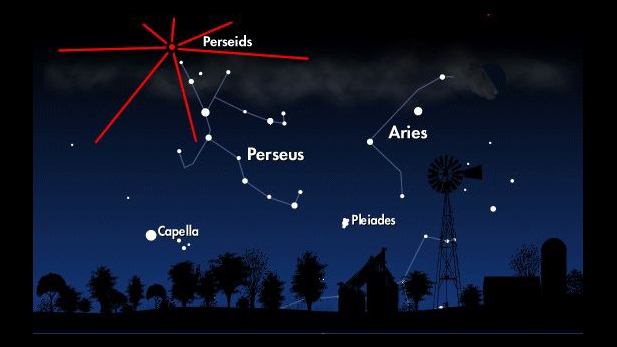 The annual Perseid Meteor Shower will peak Tuesday and Wednesday night with up to 60 shooting stars per hour possible.

The key to viewing the show is getting away from city lights and being patient, said Adam Block of the University of Arizona Science Mount Lemmon Sky Center.

Block said the best time to see the meteors are the hours between midnight and just before dawn. And it may be easier to see more meteors since the Moon’s phase is near new.

Seeing one meteor every minute or two is a very good show for a meteor shower like the Perseids, Block said.

The meteor shower, which peaks around Aug. 12 and 13 each year, is caused by a stream of dust particles left behind by Comet Swift-Tuttle that burn up in Earth’s upper atmosphere and make glowing trails across the sky. That comet orbits the sun every 130 years.

“Meteors are no larger than grains of sand or smaller. They are tiny, tiny things,” Block said. A fireball could be created by something the size of a marble.

Block said it’s not necessary to only look to the northeast sky where the constellation Perseus will be rising. Just looking up with an unaided eye should allow people to see the celestial show.

Seeing one meteor every minute or two is a very good show for a meteor shower like the Perseids, Block said.

Geminid Meteor Shower To Light up the Sky Geminid Meteor Shower to Light Up Sky This Weekend UA researchers receive grant to build new space telescope
By posting comments, you agree to our
AZPM encourages comments, but comments that contain profanity, unrelated information, threats, libel, defamatory statements, obscenities, pornography or that violate the law are not allowed. Comments that promote commercial products or services are not allowed. Comments in violation of this policy will be removed. Continued posting of comments that violate this policy will result in the commenter being banned from the site.