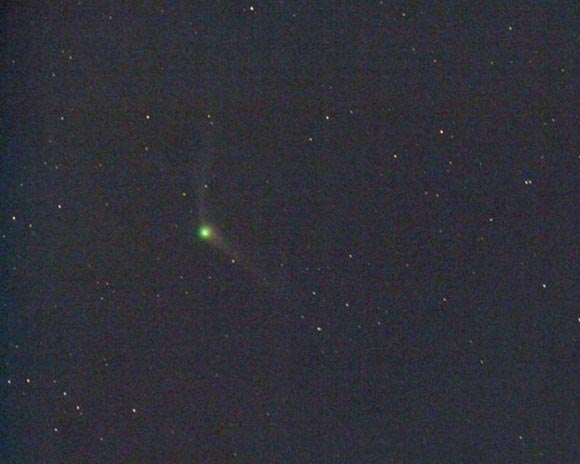 Comet C/2013 US10 Catalina shows off a compact green coma and two tails in this photo taken Nov. 22, 2015, at dawn from Arizona. The green color comes from carbon compounds fluorescing in UV sunlight. Photo by Chris Schur
Chris Schur
Listen;

Al Grauer works with the Catalina Sky Survey, watching for earth-approaching objects from atop Mount Lemmon.

He began recording two-minute audio vignettes last year to share the discoveries and branched out into discussing the solar system and space-related topics.

“People are interested in learning about science, and the way to communicate with them is to appeal to their intelligence and to connect it to their everyday experiences,” Grauer said.

To spread the word about Travelers in the Night, as the series is called, Grauer asked podcast aggregator Stitcher to put the Star Wanderer episode on its front page. Grauer said the recording took off Nov. 13, marking 100,000 downloads in the first five days.

Star Wanderer mixes science and fantasy about Comet Catalina, discovered by Catalina Sky Survey’s Rich Kowalski. The comet can be spotted with telescopes now and will soon be visible in the skies just before dawn and during twilight at dusk with binoculars, and by January with the naked eye.

“It’s a little bit of a lonely job sometimes because you are up there by yourself on the mountain. But when you find something interesting and cool, it’s fun to tell other people about it,” Grauer said.

While the number of hits on this episode has slowed down, Grauer said he saw increased activity with some of his other 200 recordings. He makes and posts two recordings a week.

From information followers provide to the podcast service, Grauer knows he has listeners of all ages, gender, ethnicity and geography.

“My audience is the world."

UA Astronomer Sees Asteroid 2 Days Before It Whizzes by Earth Arizona Astronomers Track Piece Of Falling Space Junk To Catch A Comet
By posting comments, you agree to our
AZPM encourages comments, but comments that contain profanity, unrelated information, threats, libel, defamatory statements, obscenities, pornography or that violate the law are not allowed. Comments that promote commercial products or services are not allowed. Comments in violation of this policy will be removed. Continued posting of comments that violate this policy will result in the commenter being banned from the site.