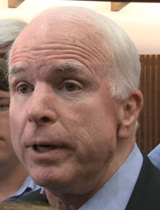 McCain, who faces a primary election race against a conservative challenger, cited Democratic Sen. Chuck Schumer of New York in making the call.

“In 2007, Sen. Schumer said we should wait until after the election and then let the next president nominate," McCain said Monday. "That was back in 2007 before the 2008 elections. I agree with him.”

At the time, there was no vacancy on the Supreme Court.

Speaking on Phoenix radio station KFYI, McCain referred to a Schumer speech urged the Senate to block any nominations during the final year of then-president George W. Bush’s term. Last weekend, Schumer said the Senate should consider any nomination forwarded by Obama.

U.S. Rep. Ann Kirkpatrick, a candidate for the Democratic nomination for McCain's seat, in a press release quoted McCain in an interview a decade ago as saying "the president’s nominees deserve an up-or-down vote."

Kirkpatrick said the Senate has an obligation to vote on Supreme Court nominees.

Obama has said he intends to announce Scalia's replacement "in due time."

Scalia was found dead Saturday at a resort ranch in Texas. His death leaves the court divided between four liberal and four typically conservative justices.

Arizona Senate Money Race Accelerates; McCain Has $5M Democrat Kirkpatrick Running for Senate Against McCain Republican lawmakers eye tax cut changes to avoid referendum
By posting comments, you agree to our
AZPM encourages comments, but comments that contain profanity, unrelated information, threats, libel, defamatory statements, obscenities, pornography or that violate the law are not allowed. Comments that promote commercial products or services are not allowed. Comments in violation of this policy will be removed. Continued posting of comments that violate this policy will result in the commenter being banned from the site.