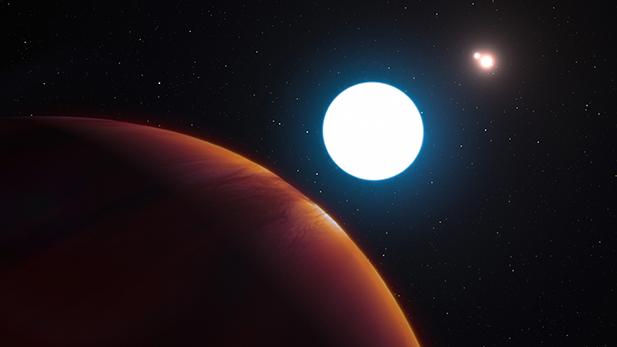 An artist's impression shows a view of the triple star system HD 131399 from close to the giant planet orbiting in the system.
ESO/L. Calçada

A University of Arizona graduate student identified the first planet ever found in a wide orbit inside a triple-star system.

Kevin Wagner is a first-year doctoral student in the U of A astronomy department. He found the planet when surveying about 100 stars, using the Very Large Telescope in Chile.

The orbit of such a planet influenced by a trio of stars would be expected to be unstable, likely resulting in the planet being ejected from the system. This planet, whose mass is four times that of Jupiter, has survived.

“This planet that we have just discovered orbits out in the middle in between the stars, so the gravity of these other stars can pull it into irregular orbits and cause exotic behavior that we haven’t seen in any other exoplanet before,” Wagner said.

The planet is 320 light years from Earth. Wagner said his research team has a picture of the object, but it appears as a distinct point of light without any surface details.

Planets in multi-star systems are of interest to scientists because they can offer clues about planetary formation.

The findings were published Thursday in the journal Science.

Newly Discovered Earth-like Planets Hold Promise for Life Study: College Calculus Deters Women from STEM Fields UA Planetary Images Get (Postage) Stamp of Approval
By posting comments, you agree to our
AZPM encourages comments, but comments that contain profanity, unrelated information, threats, libel, defamatory statements, obscenities, pornography or that violate the law are not allowed. Comments that promote commercial products or services are not allowed. Comments in violation of this policy will be removed. Continued posting of comments that violate this policy will result in the commenter being banned from the site.