Governor Brewer sits down with the President by Christopher Conover Tweet 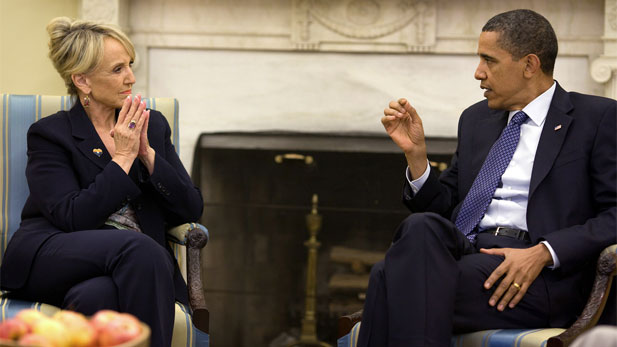 Governor Jan Brewer (R) sat down with President Barack Obama for a 30-minute meeting in the Oval Office to talk about the southern border. In recent weeks, the President has been very critical of Arizona’s new immigration law more commonly known as Senate Bill 1070. He has at times called it “misguided” and the US Justice Department is contemplating a lawsuit against the state to overturn the law.

While many people expected the meeting to be a contentious one, Governor Brewer afterwards said it was “cordial”. And she said the two agreed to work together on a border plan. Meanwhile, White House spokesman Robert Gibbs cautioned people to expect too much from just one meeting, pointing out that if the solution to the border issue was an easy one it probably would have been taken care of long ago. Gibbs also said no border legislation can go through with out Arizona.

Recently, President Obama asked Congress for $500 million to help secure the border. He also is sending 1200 National Guard troops to the US-Mexico border as part of that effort. The White House says the majority of those troops will be stationed in Arizona.

US to fill border wall gaps at open area near Yuma Arizona attorney general asks court to unblock abortion ban Trump ally Kari Lake wins GOP primary for Arizona governor
By posting comments, you agree to our
AZPM encourages comments, but comments that contain profanity, unrelated information, threats, libel, defamatory statements, obscenities, pornography or that violate the law are not allowed. Comments that promote commercial products or services are not allowed. Comments in violation of this policy will be removed. Continued posting of comments that violate this policy will result in the commenter being banned from the site.