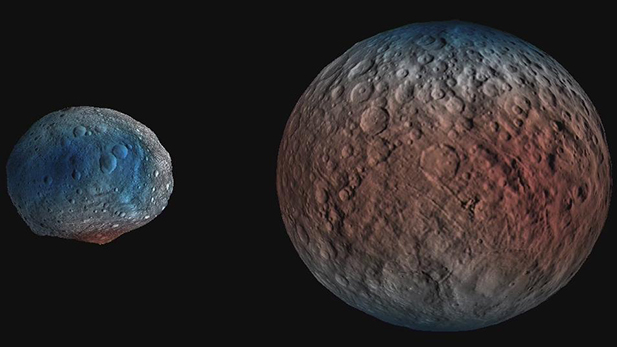 Dwarf planet Ceres overlaid with the concentration of hydrogen determined from data acquired by the gamma ray and neutron detector (GRaND) instrument aboard NASA's Dawn spacecraft.
Courtesy of NASA

After 4 billion years, the dwarf planet Ceres is still carrying a surprising amount of water weight — as much as 30 percent.

The finding, which was published in the Jan. 6 edition of the journal Science, is consistent with earlier models, and provides valuable clues to how Ceres formed.

NASA’s Dawn spacecraft found the water using the Gamma Ray and Neutron Detector (GRaND), an instrument that matches chemical elements to patterns of gamma rays and neutrons emitted by Ceres as cosmic rays strike its surface.

“The gammas and neutrons give you a fingerprint of the elemental composition of the surface to a depth of about a meter,” said Tom Prettyman, GRaND team leader and a senior scientist at the Tucson-based Planetary Science Institute.

The key word is elements. Prettyman explained that GRaND cannot detect molecules per se, so researchers have to infer the presence of water based on what they know about how the compound affects the makeup of similar objects, such as the groups of meteorites known as carbonaceous chondrites.

“So, when I’m talking about water, as seen by GRaND, we’re making kind of a leap — we’re making an assumption that the hydrogen is in — mostly in — the form of water."

The accumulated research on Ceres indicates that water has played a significant role in the dwarf planet’s history, from a 13,000-foot volcano formed by the action of salty, muddy ice, to existing ice deposits that sit in the “cold traps” of shadowy craters. At least one study has shown that ice might “hop” around Ceres — or escape it, as heating processes sublimate surface ice into water vapor.

Prettyman said ice distribution on Ceres is uneven due to the way exposure to the sun’s heat varies by latitude.

“If you went there and you got a shovel and dug a little hole at the north pole, you would probably immediately find water ice, whereas at the equator, you’d have to dig a little bit deeper — almost a meter beneath the surface,” said Prettyman.

The GRaND team found that beyond the water in this ice table, a surprising amount of Ceres’s water remains locked up in non-icy minerals. Prettyman explained that water altered material in Ceres’ interior as the dwarf planet developed and showed up in mineral lattices in the process.

“And so, if you add up all the sources of water that we see on Ceres, as inferred from GRaND observations, we get almost, but not quite, 30 percent. That’s very similar to what we expected going in, but still is a surprise to see it in the different forms that we found it," Prettyman said.

Dawn is the only spacecraft ever to orbit two destinations beyond Earth. After training its instruments on the giant asteroid Vesta from July 2011 to September 2012, it traveled to Ceres, where it has orbited since 2015.

Dwarf planet Ceres overlaid with the concentration of hydrogen, determined from data acquired by the gamma ray and neutron detector (GRaND) instrument aboard NASA's Dawn spacecraft.
Courtesy of NASA

OSIRIS-REx Asteroid Mission Fires Engine in Space UA Astronomers Study Milky Way via Balloon over South Pole Does 'Planet Nine' Exist? NAU Astronomer Says Maybe
By posting comments, you agree to our
AZPM encourages comments, but comments that contain profanity, unrelated information, threats, libel, defamatory statements, obscenities, pornography or that violate the law are not allowed. Comments that promote commercial products or services are not allowed. Comments in violation of this policy will be removed. Continued posting of comments that violate this policy will result in the commenter being banned from the site.