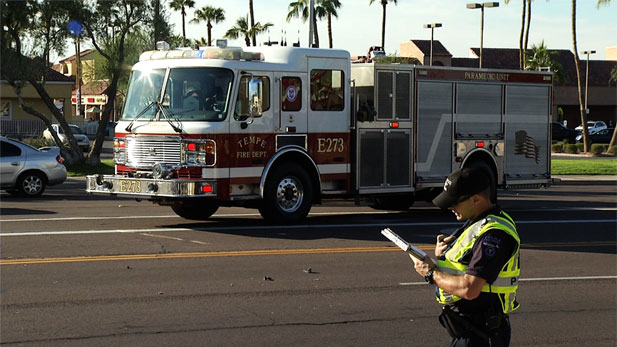 A Tucson fire truck arrives on the scene of a car accident.
AZPM

Tucson Fire spokesman Captain Barrett Baker said the department conducted a controlled burn at the Public Safety Academy Thursday. Half the crew members involved wore a new kind of hood - one that includes a moisture barrier to keep chemicals in smoke from reaching a firefighter’s skin.

Baker described the hypothesis being tested in Thursday's burn: “Does that one thing different in the hood, that moisture barrier, help prevent the body from absorbing some of these carcinogens and agents that are in these fires that are getting into our bodies?”

FEMA is funding the study to cut down on cancer cases among firefighters, Baker said. One study showed firefighters are diagnosed with certain cancers at a rate 30 percent higher than the general public.

Study Looks Into What Makes Fake News Fake Tucson Police, Fire 911 Dispatch to Be Merged Forest Service Gets OK to Seek Seasonal Firefighters, Despite Federal Hiring Freeze
By posting comments, you agree to our
AZPM encourages comments, but comments that contain profanity, unrelated information, threats, libel, defamatory statements, obscenities, pornography or that violate the law are not allowed. Comments that promote commercial products or services are not allowed. Comments in violation of this policy will be removed. Continued posting of comments that violate this policy will result in the commenter being banned from the site.