The policy shift impacts the hundreds in Southern Arizona arrested each year who smuggle pot instead of of paying to be smuggled themselves. by Associated Press Tweet 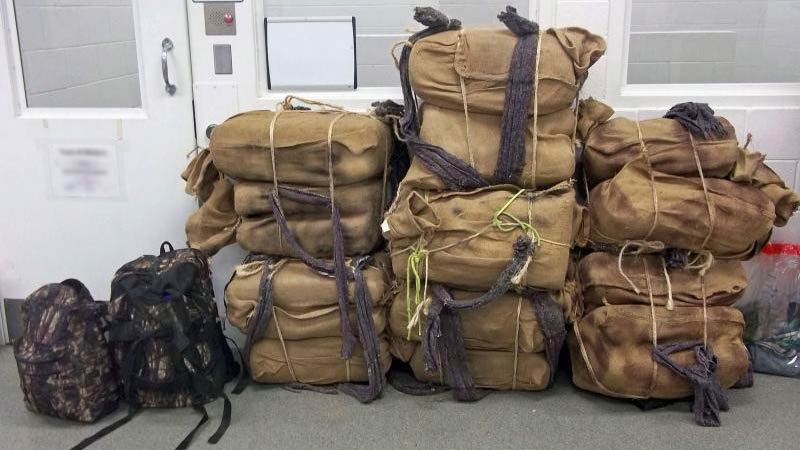 A policy change at the U.S. attorney's office in Arizona increases penalties on marijuana smugglers who cross the border on foot with backpacks, like these seized in 2017.
Customs and Border Protection

People caught smuggling marijuana into Arizona from Mexico will also face penalties for crossing the border illegally under a shift in policy by federal prosecutors.

The increased penalty called for by the U.S. attorney's office in Arizona is in line with the Trump administration's "zero-tolerance" immigration policy, Arizona Daily Star reports. Federal public defenders and defense lawyers in Tucson were notified of the new policy in mid-June.

The policy targets the several hundred people arrested each year in Southern Arizona who smuggle marijuana in backpacks across the border instead of paying hefty fees to human smugglers to get themselves into the United States illegally.

The policy doesn't appear to target people attempting to smuggle hard drugs in vehicles across the border, the newspaper said.

Federal prosecutors often use plea agreements to quickly resolve the backpacker cases, with a typical sentence of six months in prison for marijuana possession.

Now, those agreements must include a six-month sentence for a misdemeanor charge of crossing the border illegally to be served concurrently with the drug charge, according to an email a defense lawyer received from a federal prosecutor.

The plea agreements to quickly resolve the backpacker cases are needed due to the large volume of those cases, according to authorities, who added that the agreements usually are filed within a week of the arrest.

A conviction for crossing the border illegally could be used as an enhancement in future convictions.

Cosme Lopez, a spokesman for the U.S. attorney's office in Arizona, declined to comment on the misdemeanor charge.

In nearly all of the 110 backpacker cases the Daily Star reviewed from late 2015 to early 2017, the defendants faced only drug-smuggling charges.

Sinaloan Grenade Smuggler Sentenced Tunnel Found in San Luis Brought 'Hard Narcotics' to US Poll: Marijuana Legalization May Split Party Lines in November
By posting comments, you agree to our
AZPM encourages comments, but comments that contain profanity, unrelated information, threats, libel, defamatory statements, obscenities, pornography or that violate the law are not allowed. Comments that promote commercial products or services are not allowed. Comments in violation of this policy will be removed. Continued posting of comments that violate this policy will result in the commenter being banned from the site.