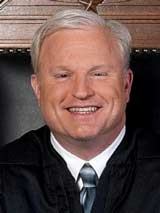 The results of voting Monday by the seven justices will have Brutinel replacing Justice Scott Bales as chief justice and Timmer replacing Brutinel as vice chief justices.

Timmer is a former state Court of Appeals judge who Brewer appointed to the high court in 2012.

Bales is a former state solicitor general who was appointed to the Supreme Court in 2005 by then-Gov. Janet Napolitano.

Arizona reports 3,234 new COVID cases, 10 deaths State Rep. Roberts abruptly announces resignation Documentary exploring death and disappearances along South Texas border comes to Tucson
By posting comments, you agree to our
AZPM encourages comments, but comments that contain profanity, unrelated information, threats, libel, defamatory statements, obscenities, pornography or that violate the law are not allowed. Comments that promote commercial products or services are not allowed. Comments in violation of this policy will be removed. Continued posting of comments that violate this policy will result in the commenter being banned from the site.