Some are calling a smart step toward boosting trade, while others say it's unnecessary and warn of its environmental impact. by Associated Press TWEET SHARE 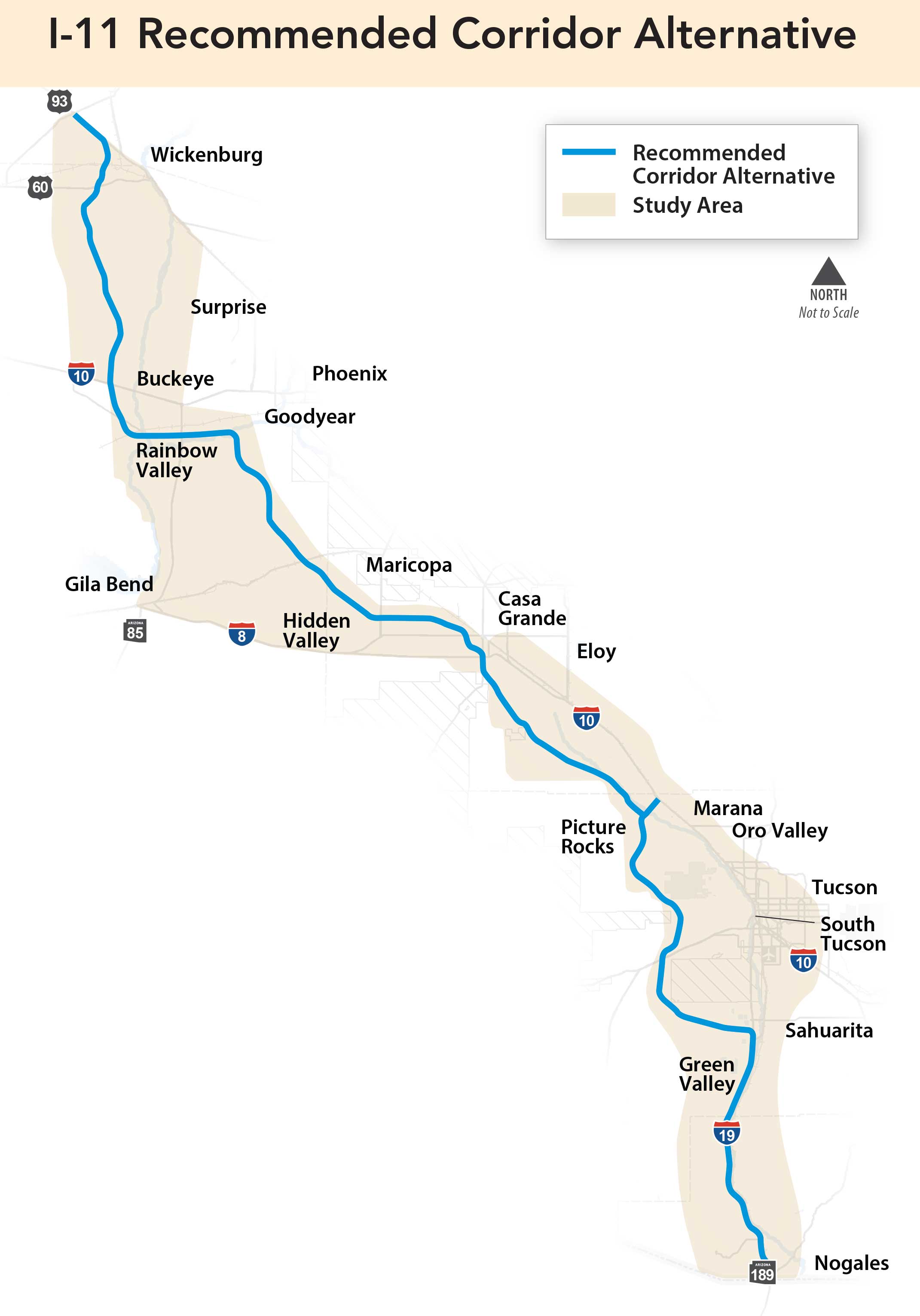 VIEW LARGER A not-to-scale map of a recommended corridor for Interstate 11 released by the Arizona Department of Transportation.

A proposed highway that would start at the border with Mexico and serve as the southern leg of Arizona's Interstate 11 is being called both an economic benefit and an environmental threat.

Federal, state and local agencies have reservations about the environmental impact for mostly undisturbed sections of the Sonoran Desert, The Arizona Daily Star reported Friday.

The 280-mile highway now in preliminary planning stages would extend from Nogales on the U.S.-Mexico border to Wickenburg, northwest of metro Phoenix.

Other Arizona sections of I-11 are in planning stages and would connect with a small section already built in southern Nevada. As envisioned, the completed I-11 would extend from Nogales to Reno, Nevada, and incorporate portions of several existing highways.

A draft environmental impact study by the Arizona Department of Transportation includes comments compiled by the agency over the past few years.

Economic reasons Tucson-area leaders back a new route include increasing trade with Mexico and reducing congestion on Interstates 10 and 19.

Critics have said the new interstate is unnecessary and are pushing for a no-build option.

A more detailed environmental study would narrow the highway corridor and help transportation officials identify which homes and businesses would be affected, said spokeswoman Laura Douglas.

Tucson Mayor Jonathan Rothschild wants the department to address the city council, which supports the I-11 proposal ideologically, although the route raises concerns.

"It looks like the proposed route goes right through our water system in Avra Valley; that is a problem," Rothschild said.

The freeway would do serious damage to the community, said Avra Valley Coalition member Albert Lannon. Widening portions of I-10 and constructing a two-tiered highway are options rather than a separate highway, he said.

"Nearly a million people come in specifically to see Saguaro National Park and some of the other attractions in the area," said park spokesman Andy Fisher. "So we would definitely want to preserve that character if we can."

A new highway west of I-10 would further fragment wildlife movement, the Arizona Game and Fish Department said.

Commercial traffic through Nogales is growing on average by 3% per year and the area can handle 4,000 trucks a day, although southern Arizona freeways are reaching capacity and truckers in Mexico may choose Texas border crossings if delays in Nogales increase, Moffatt said.

"Truckers are like water, they find the least-resistant path," Moffatt said.

Tomato Agreement Changes Impact Arizona Distributors Heat, COVID-19 and isolation put mobile home parks at risk Greater scrutiny on fraudulent unemployment claims in Arizona
By posting comments, you agree to our
AZPM encourages comments, but comments that contain profanity, unrelated information, threats, libel, defamatory statements, obscenities, pornography or that violate the law are not allowed. Comments that promote commercial products or services are not allowed. Comments in violation of this policy will be removed. Continued posting of comments that violate this policy will result in the commenter being banned from the site.