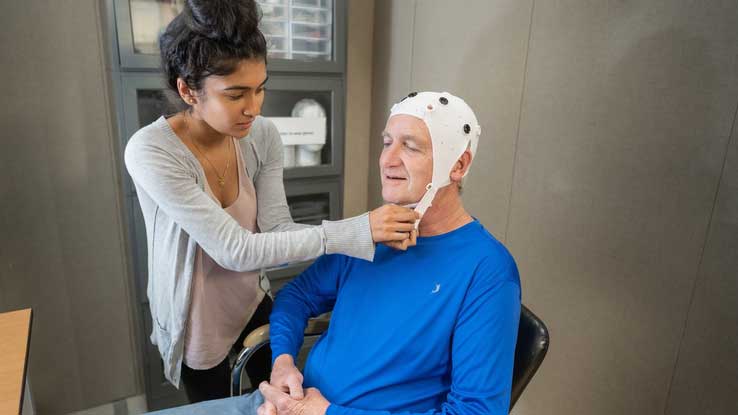 VIEW LARGER Researchers will test if exposing the brain to near-infrared light via a special cap can help enhance cognitive functioning in older adults.
University of Florida via Arizona Science Desk

Researchers at the University of Arizona have received $1.8 million from the National Institute on Aging to study whether near-infrared light can help revitalize aging brains.

They will partner with scientists at the University of Florida on the project, which received a total of $3.8 million in funding.

Scientists have previously studied the potential benefits of near-infrared light for treating wounds and reducing muscle injury and pain.

The new five-year study will use a skullcap and nasal device to expose 168 participants to the energy, which is invisible and cannot be felt. Researchers hope the treatment will boost energy metabolism in brain cells and tune up the cellular power plants known as mitochondria.

"So if we can enhance that function through this administration of this near-infrared light, we think we can improve cognitive function along the way," said co-principal investigator Gene Alexander of UA's Evelyn F. McKnight Brain Institute.

Researchers will begin to enroll participants in both Arizona and Florida over the next few months. They will look for 65- to 89-year-olds who are cognitively healthy but at risk for Alzheimer's disease.

Ducey issues guidelines for nursing homes in Arizona Researchers developing sensor testing for COVID-19 HEROES study: COVID vaccines 90% effective
By posting comments, you agree to our
AZPM encourages comments, but comments that contain profanity, unrelated information, threats, libel, defamatory statements, obscenities, pornography or that violate the law are not allowed. Comments that promote commercial products or services are not allowed. Comments in violation of this policy will be removed. Continued posting of comments that violate this policy will result in the commenter being banned from the site.