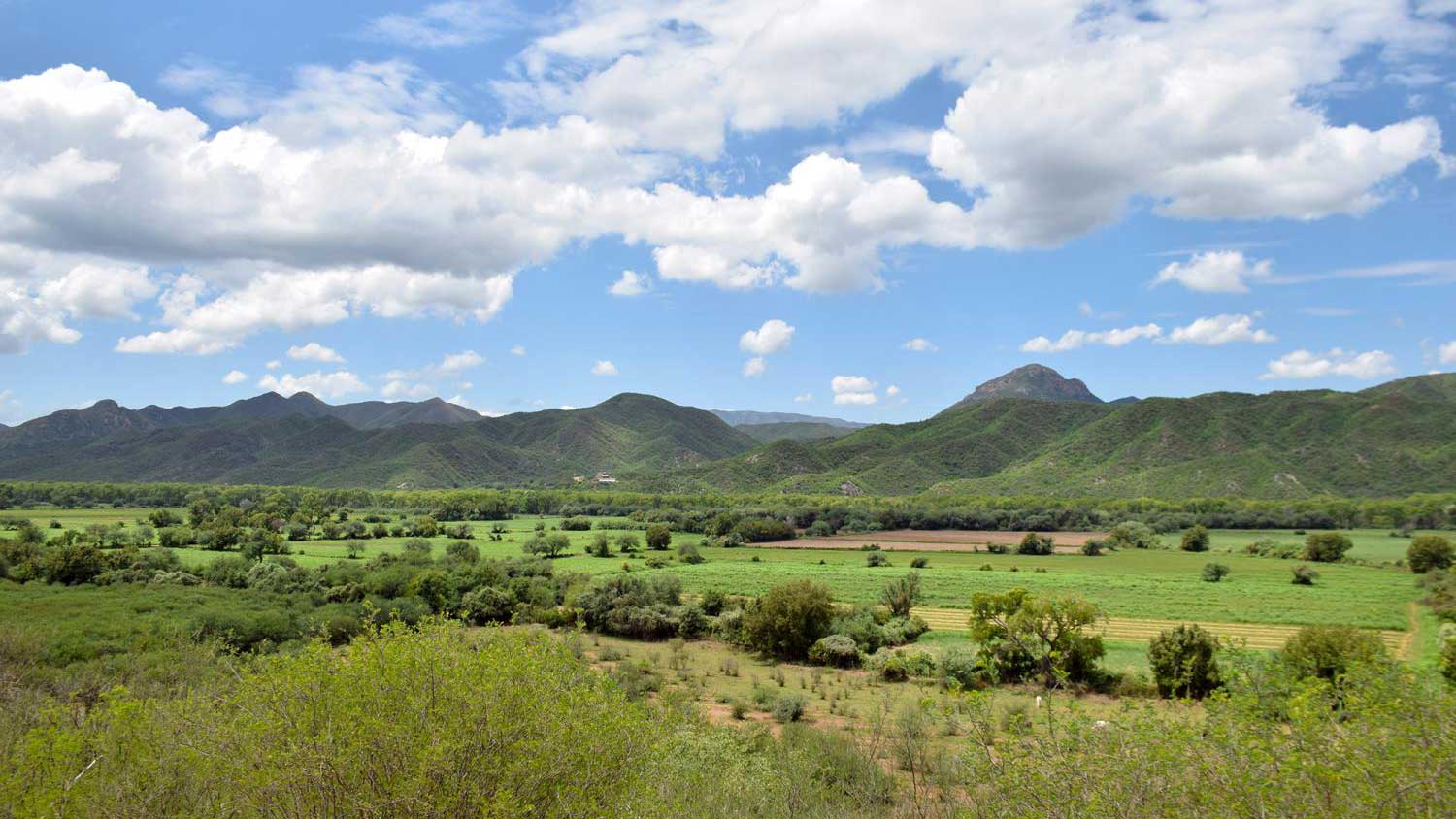 VIEW LARGER A view of the Rio Sonora valley from a hillside in Baviácora, Sonora, on July 30, 2019.
Kendal Blust/Fronteras Desk

In August 2014, Mexico’s largest mining company, Grupo México, spilled nearly 11 million gallons of copper sulfate acid solution carrying heavy metals from the Buenavista copper mine into the Bacanuchi and Sonora rivers. An estimated 25,000 people living in seven communities downstream of the mine in the Rio Sonora valley were impacted by the spill.

Now the report “La Nueva Amenaza De Grupo México” says the new tailings pond poses yet another risk to residents who say there still hasn’t been an effective response to the 2014 disaster.

“There has yet to be an effective remediation from the 2014 spill, and now we have the new tailings dam. That’s why it’s ‘Grupo México’s New Threat.’” said Claudia Ocaranza, who wrote the report with the nonprofit PODER, which also released additional reports on the mining companythis week. “Grupo México’s new threat is the tailings dam.”

Ocaranza said the dam is already being filled with contaminants, though it’s unclear if construction is complete. Mexican environmental authorities conducted an investigation into the new dam earlier this year, but a report has yet to be released.

In her report, Ocaranza details a variety of issues with the construction of the new dam. But for residents of the Rio Sonora valley, she said, the main concern is having access to safe water.

“You have to put yourself in the situation of people living in the Rio Sonora. The river is their way of life. They rely on that water for their livelihoods, their health, their economy," she said. “We would like to see authorities keep the promises they’ve made, and to finally see an effective remediation for people who haven’t lived a normal life for five years. Because that’s the problem. They don’t have a normal life. The spill carried that away.”

In the wake of the report’s release, Mexican President Andrés Manuel López Obrador responded to questions from Ocaranza on Wednesday by promising justice for communities in the Rio Sonora valley and asking Environmental Secretary Victor Toledo to address the issue during a press conference the next morning.

In his remarks, Toledo said he would meet with officials in Hermosillo next week to address health issues in the affected towns. And Mexico's Environmental Prosecutor Blanca Mendoza also suggested that Grupo México could still be on the line millions of dollars owed to a fund set up for victims of the 2014 spill.

Mexican journalist Milton Martínez also published an unrelated report Wednesday about a second, smaller Buenavista copper mine spill in 2014 that authorities allegedly hid from the public.

State OK's open-pit mine site's reclamation plan near Tucson Drought monitors paint a bleak picture for the Colorado River Officials approve corridor for part of proposed of new I-11
By posting comments, you agree to our
AZPM encourages comments, but comments that contain profanity, unrelated information, threats, libel, defamatory statements, obscenities, pornography or that violate the law are not allowed. Comments that promote commercial products or services are not allowed. Comments in violation of this policy will be removed. Continued posting of comments that violate this policy will result in the commenter being banned from the site.