A ruling on Tuesday about a cross-border shooting in Texas could affect a decision on a similar case that took place in Arizona. by McKenzie Sadeghi, Cronkite News TWEET SHARE 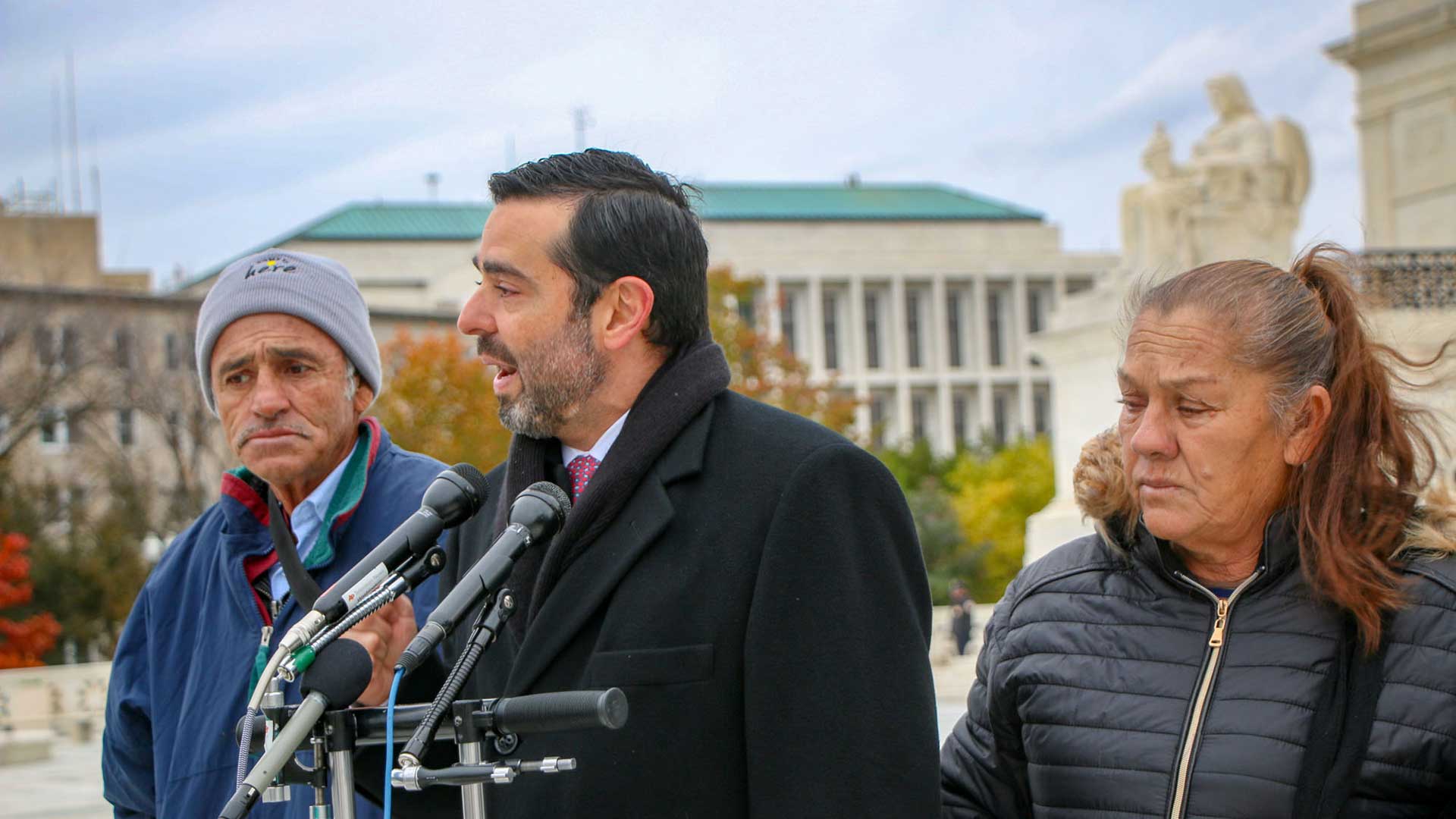 Attorney Cristobal M. Galindo outside the Supreme Court in November, after the court heard arguments in the case of Sergio Hernández, a Mexican 15-year-old who was on the Mexican side of the border when he was shot and killed by a Border Patrol agent standing in the U.S. The court Tuesday ruled that Sergio’s parents, Mexican citizens, do not have the right to sue the agent.
Amy-Xiaoshi DePaola/Cronkite News

WASHINGTON – A divided Supreme Court ruled Tuesday that a Border Patrol agent in Texas who shot across the border and killed a teen in Mexico cannot be sued by the boy’s parents for the death.

That case is almost identical to a cross-border shooting in Nogales, where courts had said the family could sue the Border Patrol agent — a decision that could be reversed by Tuesday’s Supreme Court decision.

The 5-4 decision said Congress has refused to allow such cross-border lawsuits and that courts should not take the place of lawmakers in such disputes, when diplomatic and national security issues could be affected.

“This case features multiple factors that counsel hesitation … but they can all be condensed to one concern — respect for separation of powers,” Justice Samuel Alito wrote for the majority.

“Congress’s decision not to provide a judicial remedy does not compel us to step into its shoes,” Alito wrote.

Justice Ruth Bader Ginsburg dissented, joined by Justices Stephen Breyer, Sonia Sotomayor and Elena Kagan. Ginsburg said the families were only trying to apply U.S. law to the actions of “rogue” officers who were in the U.S. at the time they pulled the trigger, and that the victim’s “location at the precise moment the bullet landed should not matter one whit” to the claims.

Ginsburg rejected the government’s argument that allowing the family to sue would affect U.S.-Mexico relations, noting that Mexico has said the exact opposite: That blocking the family’s lawsuit “is what has the potential to affect international relations.”

The case began in 2010, when Sergio Adrián Hernández and friends were engaged in a game in which they ran across a culvert separating Ciudad Juárez, Mexico, from El Paso, Texas, touched a fence on the U.S. side and ran back.

But when U.S. Border Patrol Agent Jesus Mesa rode up on his bike, he later said, he thought the youths were trying to cross the border. When he told them to stop, he said they began throwing rocks.

Mesa drew his service weapon and fired twice at Hernández, who was hiding being a concrete pillar. Hernández, then 15, was hit once in the face and killed.

A Justice Department review of the case concluded that Mesa’s actions in the shooting had not violated Border Patrol regulations. The government did not bring charges against Mesa and it refused Mexico’s request to extradite him for prosecution in that country, sparking a lawsuit by Hernández’s family.

In 2012, Border Patrol Agent Lonnie Swartz was on duty in Nogales when court documents say he opened fire across the border, firing 14 to 30 bullets through the border fence. José Antonio Elena Rodríguez, a 16-year-old who was walking down the street on the Mexican side of the border, was hit in the back by 10 of those bullets, killing him.

The Mexican Embassy in Washington said Tuesday that it did not immediately have a response to the court’s ruling. But attorneys who filed briefs in support of the Hernández family said the ruling “undermines accountability and integrity” of the government.

Matt Adams, director of the legal center at Northwest Immigrant Rights project, said the ruling is “really disappointing and obliterates any kind of accountability in abuses and violations by Customs and Border Protection,” which can “wash its hands” of its responsibilities.

Institute for Justice attorney Anya Bidwell said she was not surprised by the ruling. She agreed with Ginsburg that the fact that the shooting occurred “across the border is beside the point.”

“If there is a right, there is a remedy, and it’s very unfortunate that the parents of Sergio Hernández don’t have a remedy when clearly his constitutional rights were violated,” she said.

American Civil Liberties Union attorney Lee Gelernt, who represents the Rodríguez family in the Nogales case, said in a statement that “the Constitution does not stop at the border.”

“The gravity of this ruling could not be clearer given the Trump administration’s militarized rhetoric and policies targeting people at the border,” Gelernt said.

Sean Chapman, the attorney defending Swartz, would only say he will review Tuesday’s decision and asses its impact on the Nogales case.

But David Gans, a civil rights director at the Constitutional Accountability Center, said the ruling leaves few options for the families.

“The court has closed the courthouse doors on those victimized by federal officers, leaving them with no remedy,” Gans said in a news release.

Tohono O’odham chair decries ongoing controlled blasts for border wall project New Pima County attorney drops cash bail, some deportations After the wall, border residents take stock of what's next
By posting comments, you agree to our
AZPM encourages comments, but comments that contain profanity, unrelated information, threats, libel, defamatory statements, obscenities, pornography or that violate the law are not allowed. Comments that promote commercial products or services are not allowed. Comments in violation of this policy will be removed. Continued posting of comments that violate this policy will result in the commenter being banned from the site.