The group working to protect the nearly extinct vaquita marina porpoise was confronted for the third time this year. by Kendal Blust, Fronteras Desk TWEET SHARE 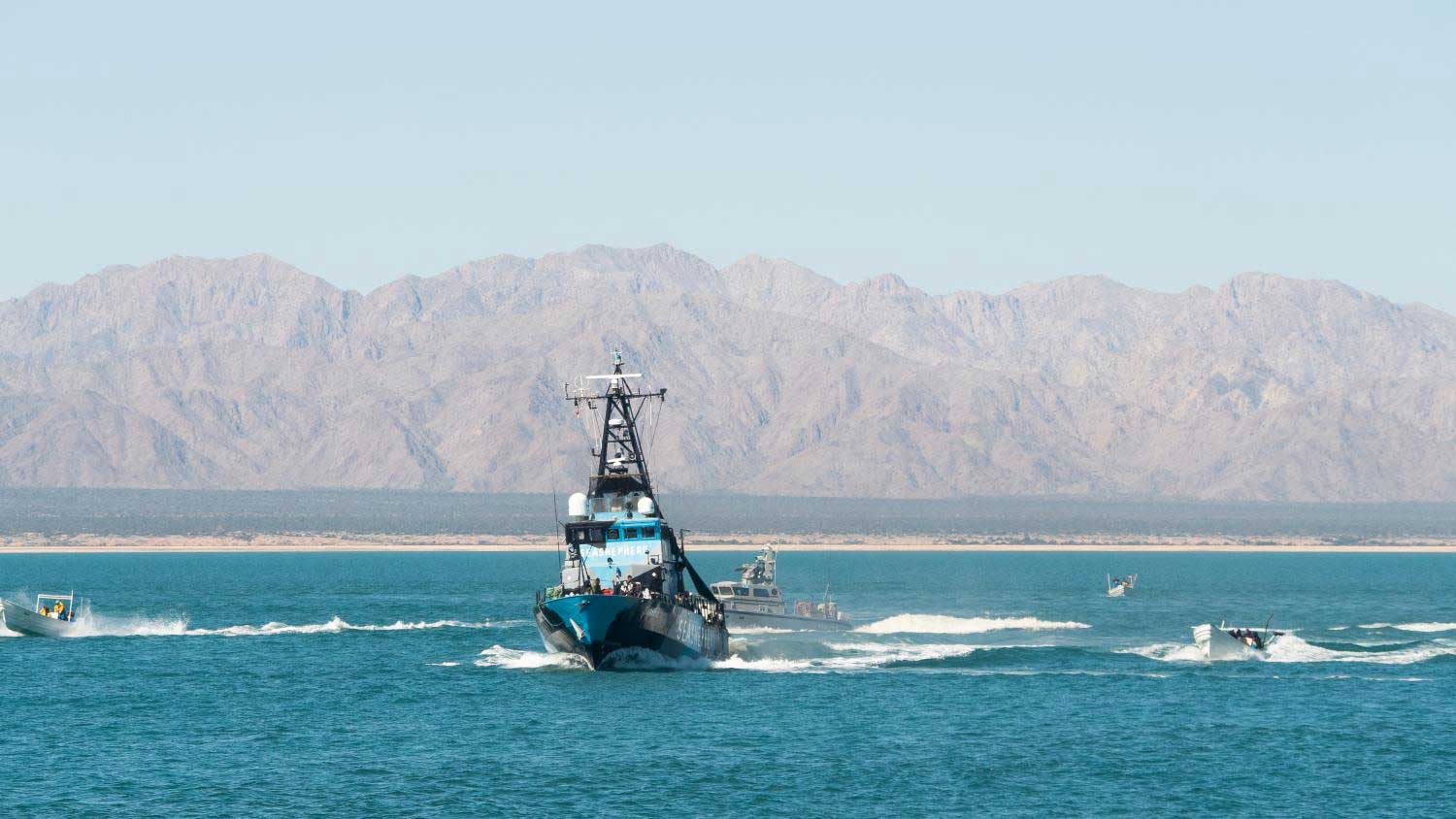 For the third time this year, conservationist group Sea Shepherd was confronted by fishermen in small boats inside the refuge area for the nearly extinct vaquita marina porpoise.

The activist crew removes illegal fishing nets poachers use to catch a large fish called the totoaba, which is highly valuable on the black market in China. But the nets also trap and drown the little vaquita.

Most recent estimates suggest there are only about 10 vaquitas left. And Wednesday, the Mexican news organization Reforma released a video of fishermen attempting to disentangle what appeared to be dead vaquita from an illegal net. However, there have been no confirmed vaquita deaths so far this year.

On Tuesday, several Mexican authorities, including two Mexican Navy vessels and environmental officials, accompanied the Sea Shepherd crew as they were patrolling for illegal nets in the vaquita's refuge. But J.P. Geoffroy of Sea Shepherd said that didn’t stop poachers’ aggression. 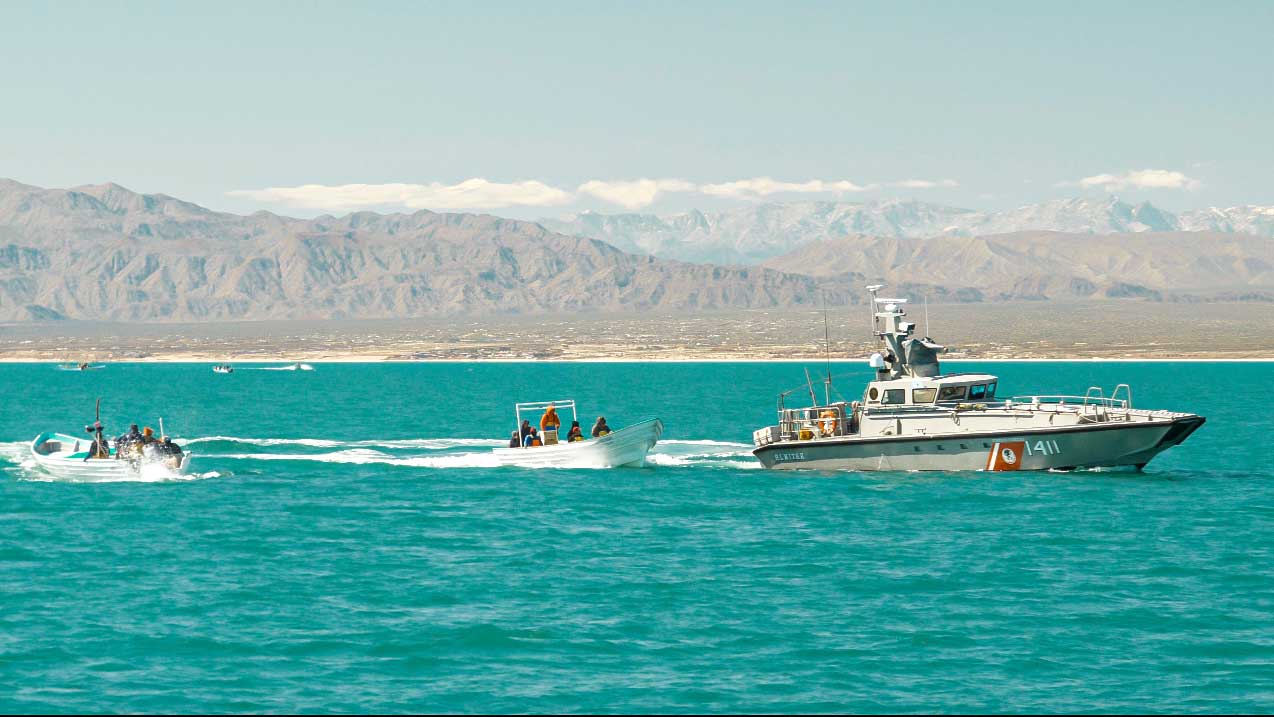 “We know that these people (are) criminals, and they have zero respect for authorities," he said. "These are not just normal fishermen."

According to a news release from the Mexican environmental protection agency PROFEPA, at least 20 small skiffs surrounded Sea Shepherd and Mexican Naval ships, and suspected poachers threw rocks, lead weights and at least one Molotov cocktail.

"The Navy saw them and made a warning shot," Geoffroy said. "They stopped after that."

But he said little can be done to stop poachers while the boats are out on the water. Especially now, during the high totoaba poaching season in the vaquita refuge, when there are often dozens of boats in the protected area, outnumbering authorities.

Geoffroy said the Mexican government has been increasing its presence in the upper part of the Sea of Cortez in recent months, including on Sea Shepherd's vessels. But protecting the vaquita isn't just a matter of cracking down on poachers, he said. Mexican authorities also need to address social and economic issues in communities near the vaquita’s habitat.

"It's really complicated," he said. "But we're just going to keep doing our job. And that's protecting the vaquita."

VIEW LARGER Fishing boats in the vaquita marina's refuge in Mexico's Sea of Cortez on March 3, 2020.
Courtesy of Sea Shepherd

Also this week, the U.S. government expanded a seafood ban meant to protect the vaquita marina.

The U.S. National Marine Fisheries Serviced announced Wednesday that imports of Mexican shrimp and other seafood caught in the vaquita's habitat would be banned, putting pressure on the Mexican government to stop the use of gill nets in the uppermost part of the Sea of Cortez.

“This is exactly how the law protecting marine mammals is supposed to work: if Mexico’s fisheries kill vaquita at a rate that violates U.S. standards, the U.S. must ban imports," Zak Smith, senior attorney at the Natural Resources Defense Council (NRDC) was quoted as saying in a news release from the Center for Biological Diversity. “Mexico has no choice but to eliminate the destructive fishing taking place in the northern Gulf of California that is driving the vaquita to extinction. It’s the only hope the vaquita has for survival, and it is required if Mexico wants to resume exporting these products to the United States.”

The embargo Wednesday expands a 2018 court order — which banned shrimp, chano sierra and curvine seafood imports from Mexico caught with gill nets in the vaquita's habitat — to include almost all seafood caught in the northernmost part of the Sea of Cortez.

Border wall scars: 'It feels like if someone got a knife and dragged it across my heart.' Biden halted border wall construction. Now what? After months of border wall construction, a look at the damage done
By posting comments, you agree to our
AZPM encourages comments, but comments that contain profanity, unrelated information, threats, libel, defamatory statements, obscenities, pornography or that violate the law are not allowed. Comments that promote commercial products or services are not allowed. Comments in violation of this policy will be removed. Continued posting of comments that violate this policy will result in the commenter being banned from the site.