The action resulted from a lawsuit filed last year by conservation groups. by Ariana Brocious Tweet

Under an agreement approved by a federal court this week, the U.S. Fish and Wildlife Service will restore the Sonoran Desert tortoise to the candidate list for the Endangered Species Act and take 18 months to evaluate the species status and issue a new decision on its eligibility for such federal protection.

Last fall, Western Watersheds Project and WildEarth Guardians filed a lawsuit against the U.S. Fish and Wildlife service for their 2015 decision not to list the Sonoran Desert tortoise under the ESA.

Cyndi Tuell of the Western Watersheds Project said that was a reversal of the agency's position for years prior, which was based on insufficient scientific data and rationale.

"The Fish and Wildlife Service decided that we were correct. That there does seem to be a reason to reconsider whether the Sonoran Desert tortoise should be protected under the Endangered Species Act," Tuell said. 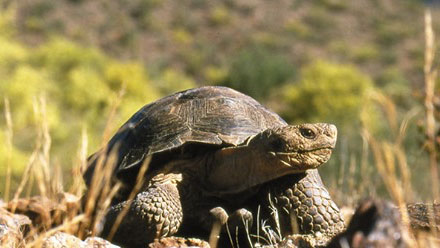 Now, the agency will have to gather new information to evaluate the species' risk of extinction.

Tuell said that will be complicated by the fact that the Arizona Game and Fish Department wasn’t able to fund monitoring studies of the species in 2009 and 2011-2014, and the Arizona State Land Department has prohibited any scientific studies on state trust lands since last year.

"There's no information that the species is doing better and there's a lot of information that its habitat is being further degraded," Tuell said, highlighting fires, development and climate change as major factors.

FWS will be accepting public comment on any proposed decisions.

Eds.: This version of the story corrects the timeline of when Arizona Game and Fish Department conducted studies, based on available information.

Here's how to help prevent wildfires this summer Contreras Fire listed as 100% contained U.S. Fish and Wildlife Service updates rules and goals for preserving Mexican wolves
By posting comments, you agree to our
AZPM encourages comments, but comments that contain profanity, unrelated information, threats, libel, defamatory statements, obscenities, pornography or that violate the law are not allowed. Comments that promote commercial products or services are not allowed. Comments in violation of this policy will be removed. Continued posting of comments that violate this policy will result in the commenter being banned from the site.