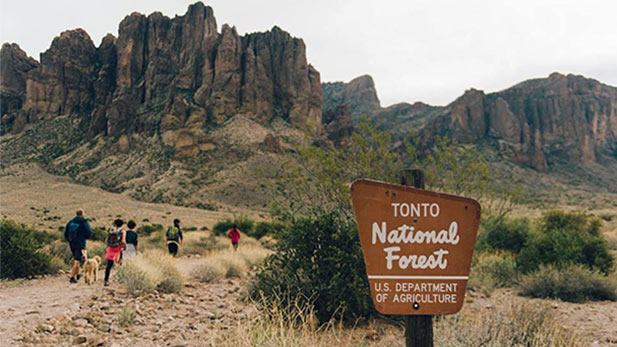 Tonto National Forest officials are trying to discourage the annual January informal gathering known as the Christmas Tree Burn that has attracted thousands of people in the past.

Forest officials said Wednesday that Arizona’s COVID-19 restrictions prohibit large gatherings and that areas of the forest’s Mesa Ranger District may be closed temporarily for recreation use to ensure that the gathering doesn’t occur.

Forest officials say thousands of people in the past have gathered on the forest to burn Christmas trees. Officials say the gathering last year of some 8,000 people in the Lower Sycamore area left large amounts of trash, abandoned campfires and other damage.

Arizona COVID-19 death toll tops 14K; caution urged for Super Bowl Arizona reports 1,338 new COVID-19 cases as state nears 800K News roundup: Feds send fewer vaccine doses to AZ, Biden takes virtual visit of distribution center
By posting comments, you agree to our
AZPM encourages comments, but comments that contain profanity, unrelated information, threats, libel, defamatory statements, obscenities, pornography or that violate the law are not allowed. Comments that promote commercial products or services are not allowed. Comments in violation of this policy will be removed. Continued posting of comments that violate this policy will result in the commenter being banned from the site.