Woman in Running for President of Mexico 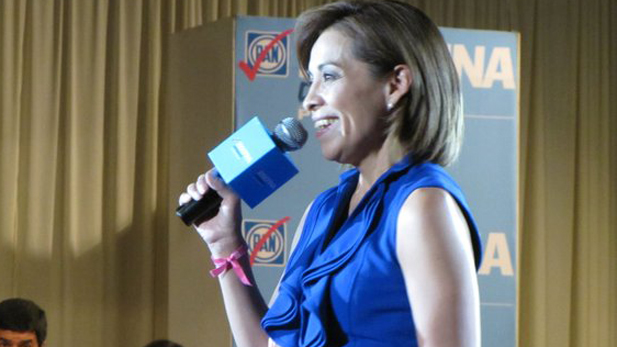 CIUDAD JUÁREZ, Mexico — Mexico is about a month away from choosing its next president. Among the candidates is the first woman to run under a major political party.

Josefina Vazquez Mota belongs to the conservative PAN party, the same as current President Felipe Calderon. She is an economist educated in Mexico, and recently served as secretary of education.

Vazquez Mota is a petite woman with a surprisingly husky voice that has become slightly raspy after two months on the campaign trail.

On a recent visit to the Mexican border city of Juárez, Vazquez Mota stepped onto a catwalk in the center of a long banquet hall wearing a royal blue dress and a belt of multicolored sunflowers. On either side of her, table after table of women chanted her name while waving blue and white napkins in the air.

There were so many women, some had to be moved to a separate room where they listened to the candidate on a speaker system.

This was Vazquez Mota's first official campaign visit to Ciudad Juárez, but she is no stranger to this city. It's here that she got her start in politics as a federal representative for a cluster of northern Mexican states.

She visited Juárez at a time when foreign factory jobs were drawing in thousands of women from across Mexico. Meanwhile an ongoing series of horrific murders of women in Juárez was gaining international attention.

"The women of Juárez are tireless fighters," Vazquez Mota told the crowd. "They are courageous and there are women here that represent every corner of this country."

Some of those qualities must have rubbed off on Vazquez Mota. She told the crowd that her experience in northern Mexico was empowering.

She said she learned to stop asking for permission to pursue her personal and professional ambitions.

Although she is happily married with three daughters, Vazquez Mota wrote a best-selling book with an eyebrow-raising title, "Dear God, Please Make Me A Widow." The book urges women to take initiative in their lives.

The lettering on her campaign bus reads 'La Jefa' which is the feminine form in Spanish for 'the boss'.

Outside the banquet hall the crowd pulsed with girl power. A gang of lady bikers posed for pictures beside their motorcycles. They wore lipstick and leather vests imprinted with the image of Vazquez Mota.

Alejandra Marquez was one of the women standing by. A young architect visibly pregnant with her second child, Marquez said she supports Vazquez Mota.

"I think she's a good role model," Marquez said. "She can be a very good leader for the country. We are proud that she's a woman."

Like most people in Mexico, Marquez's top concern this election is security. Mexicans are caught in the middle of a fight to the death between the country's most powerful drug cartels. More than 50,000 people have died and the violence continues to spread.

After her speech at the banquet hall, Vazquez Mota's campaign heads for a rally in a far-flung Juárez colonia called Oasis Revolucion.

Joining the rally was political science professor Tony Payan, who teaches across the border in El Paso. He agrees with Vazquez Mota about continuing her party's six-year offensive against organized crime.

"I think she understands well that you cannot fight organized crime face to face if you do not first separate it from the government apparatus," Payan said.

Collusion with organized crime in Mexico reaches the highest levels of government. At the moment a former governor of the border state of Tamaulipas and three military generals are under investigation for ties to drug cartels.

Vasquez Mota has been struggling in the polls.

There are three other candidates in the race; the most popular is Enrique Peña Nieto, the candidate for the PRI party. The PRI is Mexico's oldest political party which ruled the country for 71 years before PAN President Vicente Fox was elected in 2000.

The wildcard remains Mexico's undecided voters, who add up to about 25 percent of the electorate.

Also, recent protests by young voters may swing the election in a surprising direction. That could mean there's still a chance for Mexico to elect its first female president.

Number of Mexicans granted work visas in the U.S. increases Fundraising off 'liberal hacks' Paying college athletes for their images
By posting comments, you agree to our
AZPM encourages comments, but comments that contain profanity, unrelated information, threats, libel, defamatory statements, obscenities, pornography or that violate the law are not allowed. Comments that promote commercial products or services are not allowed. Comments in violation of this policy will be removed. Continued posting of comments that violate this policy will result in the commenter being banned from the site.