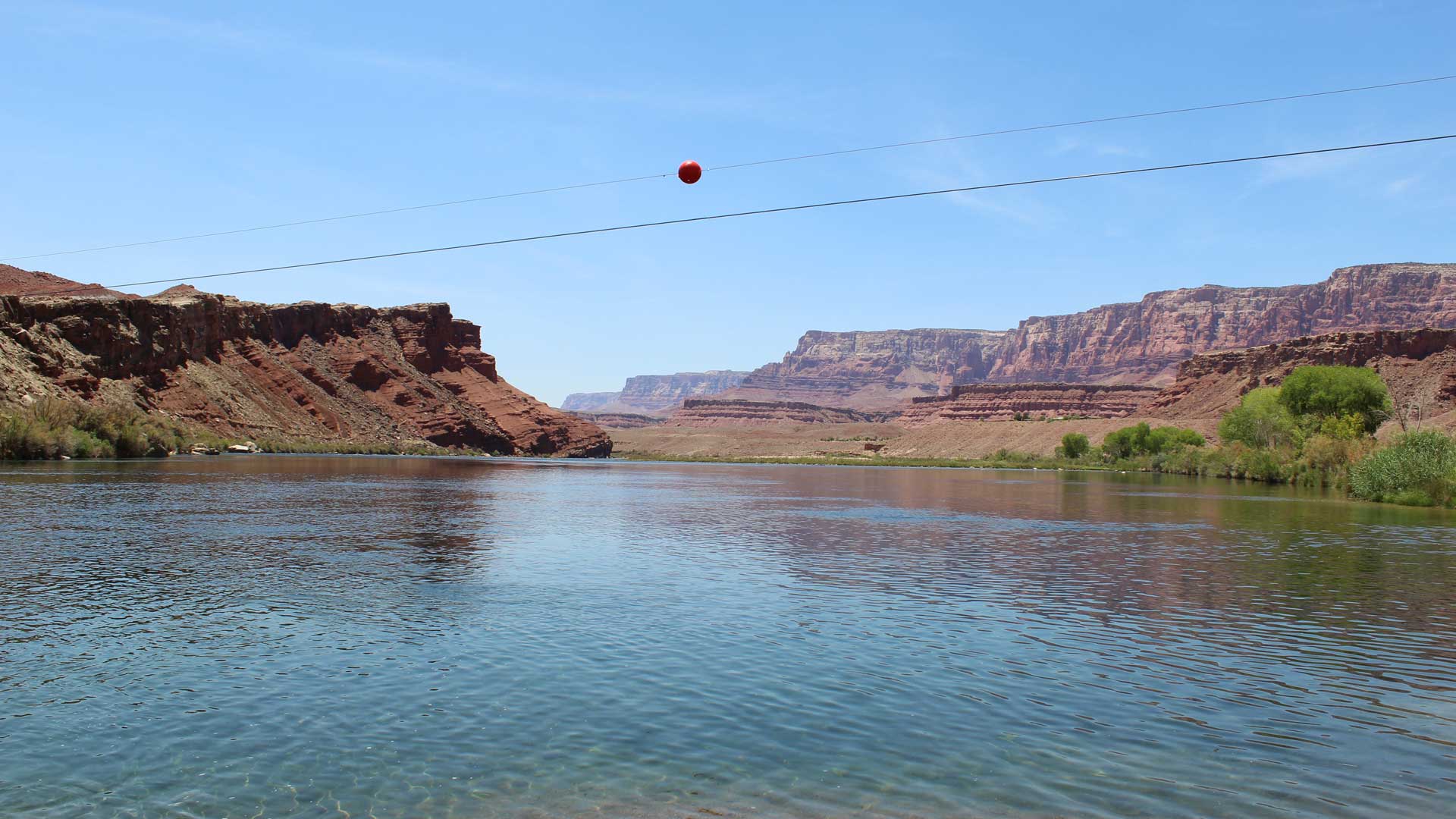 A measurement gage at Lees Ferry in Arizona is the location where Colorado River water deliveries from the Upper Basin are legally accounted.
Luke Runyon/KUNC

State engineer Kevin Rein oversees the state’s water rights system. In a meeting with the Colorado River District board on Jul. 19, Rein assured members he would not be mandating conservation among their municipal, industrial and agricultural users. The district covers 15 counties in Western Colorado.

The federal government recently called on the seven states that use the river to curtail their uses by two to four million acre-feet to keep the Colorado River’s largest reservoirs — Lakes Mead and Powell — from declining to dead pool levels and threatening the drinking water supplies for tens of millions of Southwestern residents.

Colorado officials have argued the blame for the river’s supply-demand imbalance rests with California, Arizona, and Nevada. Some doubt the federal government’s authority to demand the states use less water. The 1922 Colorado River Compact, a document that inflated available water within the entire basin, apportioned 7.5 million acre-feet of water to the river’s Upper and Lower Basins, respectively. In recent decades Lower Basin uses have exceeded that amount, while Upper Basin uses have remained below the apportionment.

“We’re way under our allocation of 7.5 million acre-feet a year,” Rein said. “So what does that mean? ‘We need to conserve.’ To me, that means that we don’t change our administration at the state engineer’s office.”

Rein said he has mandated water use reductions in other Colorado watersheds under the compact administration legal process. But the Colorado River has avoided that fate so far, he said. Without a solid legal basis, Rein said his hands are tied.

“Somebody might tell me I’m wrong someday, but right now, I don’t see a legal basis for asking people to curtail,” Rein said.

Federal officials continue to paint a bleak picture for Colorado River reservoirs without unprecedented amounts of conservation over the next year. The Bureau of Reclamation runs a “Protection Volume Analysis,” which gives an amount of conserved water needed to keep Lake Powell and Lake Mead at specific target levels.

During the same Colorado River District meeting, the Bureau of Reclamation’s Upper Colorado River assistant regional director Katrina Grantz laid out the agency’s rationale for asking for two to four million acre-feet in conservation. She said the cutbacks should come from all corners of the watershed and all sectors of the economy.

Colorado River District general manager Andy Mueller said he wanted to know how the federal government was planning to tighten how it accounts for water use in the Lower Basin, including evaporation from reservoirs, a longtime complaint of Upper Basin leaders.

“It is extremely frustrating to see system water utilized for the benefit of the three Lower Basin states and us taking a hit for it. And now we are for the first time, frankly, about to be injured by it,” Mueller said.

Upper Basin leaders have resisted calls for specific amounts of conservation on the Colorado River. In a plan released last week, the four Upper Basin states — Colorado, Wyoming, New Mexico and Utah — instead call for the reinstatement of a conservation program that paid farmers to forgo water supplies, first tested in 2014.

“There’s a lot of mistrust up here,” said board member Marc Catlin, a Republican member of the Colorado House of Representatives. “The idea that we’re going to tell you how much we can save allows [the Lower Basin] to decide what they’ll do. It seems to me that somebody at the Bureau of Reclamation has some goals laid out for the Upper Basin, and we’d like to know.”

A Bureau of Reclamation reservoir forecast in August is set to steepen the existing cutbacks among Lower Basin users. If current projections remain, the Lower Basin will enter a Tier 2 shortage condition for 2023, deepening cuts to users in Arizona, Nevada, and Mexico.

This story is part of ongoing coverage of the Colorado River, produced by KUNC, and supported by the Walton Family Foundation.*

Tribes in the Colorado River basin say they're 'in the dark' as states discuss water conservation On the Colorado River the feds carry a big stick. Will the states get hit? What will Arizona do as its share of Colorado River water diminishes?
By posting comments, you agree to our
AZPM encourages comments, but comments that contain profanity, unrelated information, threats, libel, defamatory statements, obscenities, pornography or that violate the law are not allowed. Comments that promote commercial products or services are not allowed. Comments in violation of this policy will be removed. Continued posting of comments that violate this policy will result in the commenter being banned from the site.