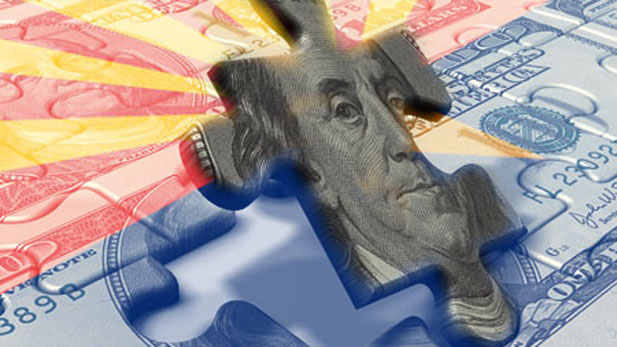 For the most part, politically active nonprofits aren’t legally obligated to disclose the names of their donors. The dollars they spend on campaigns are known as “dark money,” a term for when the source of funds spent to influence the outcome of an election is kept secret.

“Right now you can continue to use what we call dark money, anonymous money, to pay for tens of millions of dollars of political advertisements,” he says.

With Proposition 211, dubbed the Voters’ Right To Know Act, Goddard has a chance to change that.

Under the proposal, anyone – individuals or political groups – that spends more than $50,000 to influence an election in Arizona would have to disclose the original source of any donations they receive that exceed $5,000.

“In other words, if you spend money on media, you can't hide behind some kind of a phony baloney legal shield,” Goddard says. “You've got to say who the original source of the cash that is used for the advertisements is.”

It’s tough to describe how much dark money is spent on elections, but by one estimate from Open Secrets – a nonpartisan organization that tracks money in U.S. politics – more than $1 billion in dark money was spent during the 2020 election season. And that’s just at the federal level.

Prop. 211 is designed to shed a light on at least some of the dark money spent on Arizona elections. By tracing donations back to an original donor, Goddard said the proposed law is designed to undermine efforts to move political funds through opaque nonprofits and political organizations – some set up for the express purpose of keeping donors hidden.

Scot Mussi of the Arizona Free Enterprise Club said it’s not so simple. He warns that going after what Goddard describes as the original source – and giving the Arizona Citizens Clean Elections Commission the authority to open investigations to that end – will lead to open-ended inquiries that sweep up unsuspecting donors.

“They could go after a group and then force them to hand over their list of donors,” Mussi says. “And then any organization that may be affiliated with that group would then be subject to audits, harassment, and investigations under this measure.”

Mussi warned that people’s right to free speech, and ability to spend money to that end, could be stifled by the results of those investigations.

“You could have your information turned over to the government, put on public records, in which that information can be used to dox, harass, intimidate, even threaten people for simply the organizations, or the positions, or the causes they support,” Mussi says.

Goddard says that’s why there’s a minimum contribution limit of $5,000 when it comes to donors who’d be identified. The point, he says, is not to go after small-time donors – but rather large donations that are made in such a way to intentionally stay hidden.

Goddard says that’ll create a level of accountability now lacking in anonymous political messages, both for nonprofits who hide their donors and the donors themselves.

Goddard believes that’ll create a level of accountability now lacking in anonymous political messages, both for nonprofits who hide their donors and the donors themselves – a lack of accountability he says is perverting political discourse. He bets people and nonprofits would behave differently if payments for those messages were traced back to a company or individual.

“They're not responsible for the message that's being sent out. And those messages have only one purpose,” Goddard says. “And that is to win, by whatever means is possible, by defamation, by outright lying, if necessary.”

Prop. 308 - Tuition for DREAMERS Voters confident in election procedures while casting ballots Prop. 308 supporters project win as vote count continues
By posting comments, you agree to our
AZPM encourages comments, but comments that contain profanity, unrelated information, threats, libel, defamatory statements, obscenities, pornography or that violate the law are not allowed. Comments that promote commercial products or services are not allowed. Comments in violation of this policy will be removed. Continued posting of comments that violate this policy will result in the commenter being banned from the site.