One of the hardest hit sectors in the down U.S. economy is retail. Consumers are keeping their wallets closed over fears of unemployment and uncertainty about the future. One retailer is showing signs of improvement in its financial picture. by Robert Rappaport Tweet 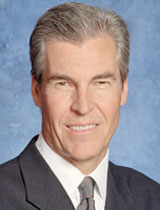 Lundgren, a graduate of the University of Arizona, says 2009 was a bad year for the retail industry, but it was a great learning experience about how business needs to change with the times.

Lundgren, who has a University of Arizona retailing center named after him spoke in Tucson last week.

Listen to the story from In-Depth Arizona :
MORE: Business, Economy

Small businesses face ongoing challenges from COVID-19 pandemic Downtown Tucson gets boost for TV and film projects The Desert Blooms in a Bountiful Monsoon.
By posting comments, you agree to our
AZPM encourages comments, but comments that contain profanity, unrelated information, threats, libel, defamatory statements, obscenities, pornography or that violate the law are not allowed. Comments that promote commercial products or services are not allowed. Comments in violation of this policy will be removed. Continued posting of comments that violate this policy will result in the commenter being banned from the site.