The plan is to raise $1 million in revenue to offset the city budget subsidy of the Sun Tran transit system.

The manager and council members have come up with three proposals to raise fares, but when the council meets Tuesday, it could craft a plan that is some combination of the three, said Tucson Mayor Jonathan Rothschild.

As they stand, one proposal spares the one-way low-income fare from increases, while they all raise the one-way cash fare to varying degrees. 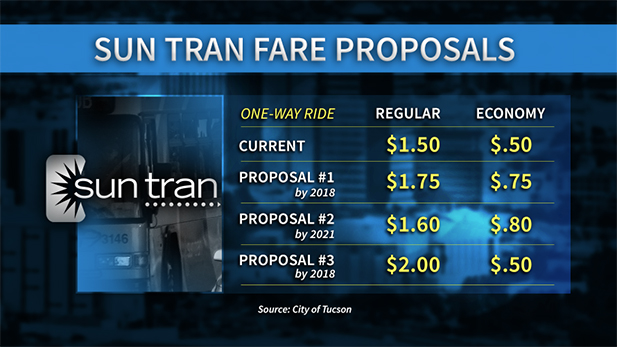 “And transit, we have not raised rates in years, and the fact of the matter is, costs continue to go up," he said.

Sun Tran riders say they depend on the bus, and it will be challenging to get around if they cannot afford increased fares.

“I understand that obviously they have operating costs that they have to cover," said bus rider Nathaniel Avalle. "Especially being on the low income pass, it’s going to be a big impact on my budget.”

The Tucson Bus Riders Union is lobbying the city to avoid bus fare increases. One angle to that argument is that low fares encourage people to ride the bus, which reduces congestion and greenhouse gases, said State Sen. Steve Farley (D-Tucson).

Also in this episode of Metro Week:

Tucson Updating 120 Bus Stops, Building 5 New Shelters Pima Supervisors Election: Board Control at Stake? Tucson Bus Fare Increase on City Council Agenda Tuesday
By posting comments, you agree to our
AZPM encourages comments, but comments that contain profanity, unrelated information, threats, libel, defamatory statements, obscenities, pornography or that violate the law are not allowed. Comments that promote commercial products or services are not allowed. Comments in violation of this policy will be removed. Continued posting of comments that violate this policy will result in the commenter being banned from the site.