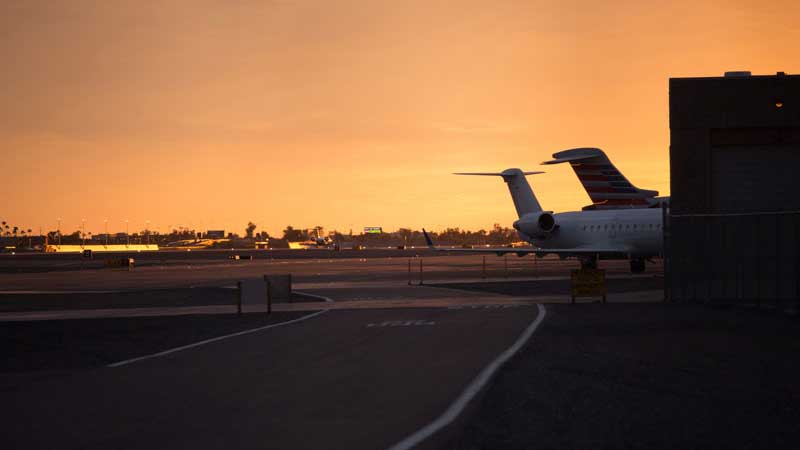 PHOENIX — Phoenix Sky Harbor International Airport is looking ahead two decades with a plan that calls for expanding and improving facilities to match projected cargo and passenger growth.

The Phoenix City Council on Tuesday approved the airport's 20-year plan, sending it to the Federal Aviation Administration for review.

"Every month we've been hitting records for the number of people traveling through Sky Harbor," Phoenix Mayor Kate Gallego told the Arizona Republic. "We want to invest ahead of demand so we can continue to provide the same excellent service and experience that travelers expect from us."

The estimated $5.7 billion plan includes moving cargo facilities to land on the airport's north side. The area targeted for expansion is currently blocked by railroad tracks, so the plan calls for lowering the tracks below ground and building taxiways over.

Moving the cargo facilities would free up space for the Air National Guard to expand its refueling operations.

The airport also plans to add gates accessible by bus as the aging Terminal 2 heads for demolition. Passengers would be dropped off from busses to board planes on the tarmac. The airport expects Terminal 2 to be torn down next year.

"Terminal 2 no longer meets the needs that it met in 1962 when it opened," Sky Harbor assistant director Deborah Ostreicher told KTAR-FM . "So Terminal 2 will be coming down, Terminal 3 is being modernized and another concourse is being connected to Terminal 4."

The plan also calls for building a connection between Terminals 3 and 4 to allow passengers who have already passed through security to access both.

"We want to be smart about how we plan for the future," Ostreicher said. "Every time a need comes up if we just make a random decision or even a strategic decision about putting something one place versus another, it may not carry us well into the future."

The city will still need to approve each project in the plan as it comes up. Airport projects are funded by passenger fees as well as state and federal grants.

Civil engineers recommend raising taxes for Arizona road repairs Rocky Point expects surge of holiday visitors despite border travel restrictions News roundup: AZ unemployment on the rise, Ducey says state will celebrate Indigenous Peoples' Day
By posting comments, you agree to our
AZPM encourages comments, but comments that contain profanity, unrelated information, threats, libel, defamatory statements, obscenities, pornography or that violate the law are not allowed. Comments that promote commercial products or services are not allowed. Comments in violation of this policy will be removed. Continued posting of comments that violate this policy will result in the commenter being banned from the site.