Activists Who Can't Vote Influence Those Who Can 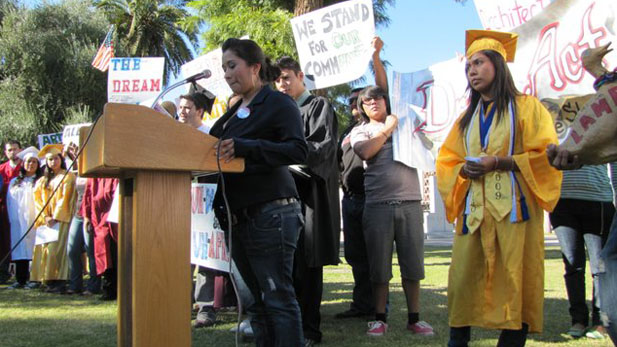 Last month, Time Magazine featured a 27-year-old undocumented immigrant activist from Phoenix in its list of the world’s 100 most influential people.

The activist, Dulce Matuz, an advocate for undocumented migrant youth looking for a pathway to citizenship, was featured alongside Marco Rubio, the Middleton sisters, and other moguls Time says “challenge us and change our world.”

The magazine's decision highlights a certain irony common among young immigrant activists in Arizona: They’re politically connected -- and effective -- enough to appear in Time, to call congressmen on their personal cellphones, to post profile pictures on Facebook with President Obama one week, Hillary Clinton the next. Yet they cannot participate in the most basic of political activities: They can’t vote because they're not citizens.

This doesn’t stop them from influencing the voters who can.

One group, self-identified as Team Awesome, proved this in an especially dramatic way last fall when they helped increase the Latino voter-turnout in one area in Phoenix by 480 percent -- and, in doing so, helped elect the first Latino to represent an overwhelmingly Latino district on the Phoenix City Council.

“We call it voter contact,” said Team Awesome core member Tony Valdovinos. “Give them a call, knock on their door, give them a mail piece.” He goes on, “We got to the point where people were annoyed, because they [would be] like, ‘Oh my God, stop calling. I get it.'"

There’s nothing particularly remarkable about the strategy as Valdovinos outlines it -- knocking on doors and talking to voters is the cornerstone of any political campaign.

But by doing these things, and by doing them a lot (they knocked on 72,000 doors in the district), they did in fact end up achieving something remarkable: They changed voter behavior, getting most residents in a neighborhood with a historically low voter turnout record out of their houses, and into the voting booths.

The campaigners also built a brand for themselves. Team Awesome was also featured in Time and later, Daniel Valenzuela’s own District Five YouTube show (DTV).

“Viri, I want to start with you,” the councilman asked Valdovinos’ teammate, Viri Hernandez in episode one. “What is Team Awesome?”

“Well,” Hernandez began. “Team Awesome is a group of students that came together about a year ago, students from different colleges, different high schools ... ”

Specifically, many of Team Awesome’s core members, including Hernandez and Valdovinos, are so-called DREAM Act students, named for the failed legislation they support which provides undocumented students like them with a pathway to citizenship.

If, that is, they’re still even students -- Valdovinos isn’t in school anymore because he says he was priced out of college by a tuition hike aimed at getting undocumented students out of state-funded institutions.

That so many of the original Team Awesome members are undocumented is important to note for two reasons. One, it helps explain their incredible success. The problem so many political campaigns have isn’t that they don’t know voter contact is important -- it’s that they struggle to recruit and retain volunteers who are dedicated enough to the candidate to put in the time required that voters are eventually saying what they said to Valdovinos: “Oh, my God, stop calling. I get it.”

The undocumented activists who started Team Awesome have a lot at stake, politically, and so they were more willing than most to give up their jobs -- and in Valdovinos’ case, a beloved bodybuilding routine -- to knock on doors basically all day, every day, for free.

The decision yielded this response from Valdovinos’ father: “Are you serious? How are you going to stop working and go walk doors in the middle of the heat? Are you crazy?”

No, Valdovinos said, he’s not crazy. He just really wants things to be different. Yes, federal immigration reform is ideal. But he’s lived in Arizona long enough to know local officials can have a huge impact on his life. He thinks, maybe, a different community college board wouldn’t have closed the loopholes that allowed undocumented students to pay in-state tuition. He also thinks a different county sheriff might not be so relentless in his immigration enforcement tactics. So, Valdovinos puts all of his energy into local races: namely the race for Maricopa County sheriff.

Which brings us to the second reason the students’ lack-of-legal status is important to mention: It’s something of a political double-edged sword in Arizona. On the hand, it helps politicize them and gives them political reach. On the other hand, it’s one of their biggest political liabilities.

Some analysts say their support could harm -- more than help -- the candidates they endorse. Nancy Hicks Marshall is a local lawyer who, like Valdovinos, is active in the sheriff’s race. She concedes that in areas of Phoenix that aren’t so densely Latino, the contradiction of young people in the country illegally who are canvassing for a law enforcement candidate -- it might be too much.

“It would be a hard sell for them to, let’s say, knock on the doors in my predominantly Republican district and win over voters,” he said.

Several people with the county Democratic Party turned down interview requests about Team Awesome’s role in upcoming elections, saying only that the political influence and political liability the team represents is a “delicate balance, and one nobody wants to talk about.”

Fronteras Desk is a multimedia collaboration among seven public radio stations in Arizona, California, Nevada, New Mexico and Texas, including Arizona Public Media. Its reports air on NPR 89.1 and can be seen at azpm.org.

'Show me your papers': A decade after SB 1070 Border Patrol agents raid No More Deaths migrant aid camp Tucson mayor and City Council approve city budget, leaving police funding nearly flat
By posting comments, you agree to our
AZPM encourages comments, but comments that contain profanity, unrelated information, threats, libel, defamatory statements, obscenities, pornography or that violate the law are not allowed. Comments that promote commercial products or services are not allowed. Comments in violation of this policy will be removed. Continued posting of comments that violate this policy will result in the commenter being banned from the site.