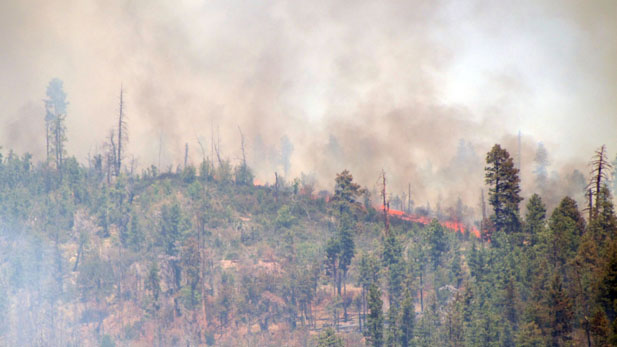 Four fast-moving wildfires have consumed more than 22,000 acres in Arizona's rugged central and eastern mountain ranges. More than 1,200 firefighters, supported by aircraft, were working to contain the flames.

Extremely dry and hot conditions and the threat of more fires led the Arizona Forestry Division on Wednesday to expand fire restrictions on state lands to all 15 counties. Earlier in May, it had imposed restrictions in six southeastern Arizona counties.

The historic town of Crown King remained evacuated as a fire burning all week filled the region with smoke and ash. The Gladiator Fire was reported at 6,400 acres and growing, with firefighters worried about the effects of expected 40 mph winds Thursday afternoon.

The Gladiator Fire had destroyed three homes, and firefighters were working to protect other structures on the eastern edge of the town. Crown King residents were being housed at Bradshaw Mountain High School East Campus in Prescott Valley in a shelter being run by the Red Cross.

The biggest fire, burning 21 miles south of Payson, more than doubled in size between Tuesday and Wednesday, and it was estimated at 12,500 acres Thursday morning. The Sunflower Fire was moving through extremely dry grasses, pinon pine and cypress trees.

The federal Incident Information System website, which carries wildfire information nationally, reported that the Sunflower Fire was 10 percent contained. A wind shift in the previous 24 hours was sending smoke from the fire to the northwest, with potential impact on Flagstaff, the report said.

A third fire burned 1,900 acres on the Fort Apache Indian Reservation and was predicted to go to 5,000 acres before being controlled. It was 45 percent contained and was burning on the scar of the Chediski Fire, which burned in 2002, the InciWeb website reported.

The Elwood Fire burning on the San Carlos Indian Reservation consumed more than 1,500 acres and was 5 percent contained.

State Forester Scott Hunt announced in a press release that fire restrictions will take effect Friday morning on all unincorporarted state trust lands, Game and Fish wildlife areas and state parks. Campfires, charcoal-burning devices and use of fireworks and acetylene and other torches will be prohibited.

Information on active wildfires in Arizona is available at the federal government's InciWeb website.

Defense Department cuts funding for border wall section in Yuma Groups say border wall construction threatens biodiversity of Arizona sky islands Campfires, stoves, smoking banned on public lands for fire risk
By posting comments, you agree to our
AZPM encourages comments, but comments that contain profanity, unrelated information, threats, libel, defamatory statements, obscenities, pornography or that violate the law are not allowed. Comments that promote commercial products or services are not allowed. Comments in violation of this policy will be removed. Continued posting of comments that violate this policy will result in the commenter being banned from the site.