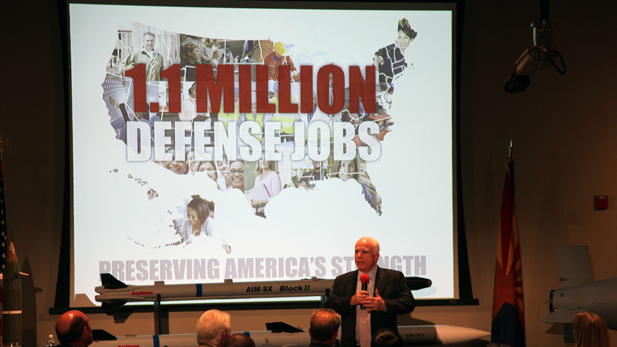 On Monday in Tucson, he urged Raytheon Missile Systems employees to ask their federal representatives to come up with a bipartisan alternative.

The automatic cuts, called sequestration, are set to go into effect next Jan. 1.

The impending cuts are part of failed negotiations in mid 2011 to reduce the federal budget. Without congressional action, the budget reductions will start at the beginning of the year and will be split 50 percent from the Department of Defense and 50 percent from non-defense departments.

The automatic cuts are too deep, McCain said.

"I agree strongly that we could have reductions in spending in both defense and non-defense, but it must be done with a scalpel, not with a meat ax,” he told employees of the defense contractor Raytheon Monday.

The cuts are disproportionate, he said, because the Department of Defense absorbs 50 percent of the cuts, while making up 19 percent of federal spending.

McCain and other U.S. senators are conducting a series of town halls throughout the country highlighting the automatic defense cuts. 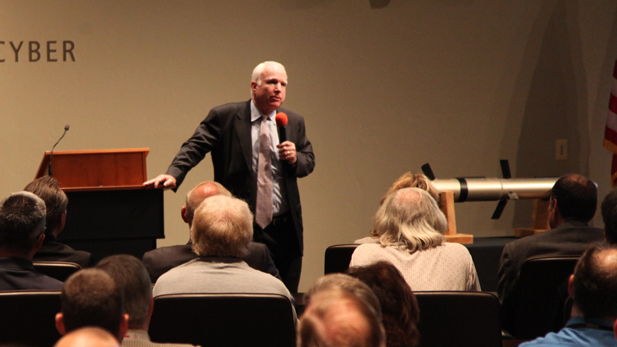 During the Tucson town hall, a Raytheon employee asked McCain about the Warn Act. The law says if federal budget cuts cause layoffs in a private company, workers have to get 60 days’ warning or notice of the cuts.

McCain said he agreed with the provision to give employees planning time for expected layoffs.

“Right now there’s not enough specificity in the process of sequestration," Lawrence said. "We’ve got no direction from our customers in terms of contract and things like that, so we don’t know enough to really trigger the requirements of the Warn Act."

McCain said senators and representatives should make tough decisions for a bipartisan budget agreement to stop the automatic cuts, but he also said President Barack Obama needs to take a leadership role in the process.

He predicted the sequestration resolution will come up during a "lame duck" session of Congress, between the November elections and the beginning of the year.

After meeting with Raytheon employees, McCain released a statement about pending sequestration, again saying the president has failed to lead Congress to an alternative.

In part, it read: "The responsibility to avert this crisis is shared, and the time to negotiate a solution is now – not after the November election. Among our biggest obstacles to doing so is the President’s failure to lead. President Obama signed into law the legislation that put into place the cuts slated to occur on January 2nd. He has a solemn responsibility – and duty – as Commander in Chief to help devise a solution that averts this disaster and protects our nation’s security."

Sequester Affects Tucson: Health, UA, More McCain: Sequestration Will Cost AZ 49K Jobs Mayor Romero creates task force on gun violence
By posting comments, you agree to our
AZPM encourages comments, but comments that contain profanity, unrelated information, threats, libel, defamatory statements, obscenities, pornography or that violate the law are not allowed. Comments that promote commercial products or services are not allowed. Comments in violation of this policy will be removed. Continued posting of comments that violate this policy will result in the commenter being banned from the site.