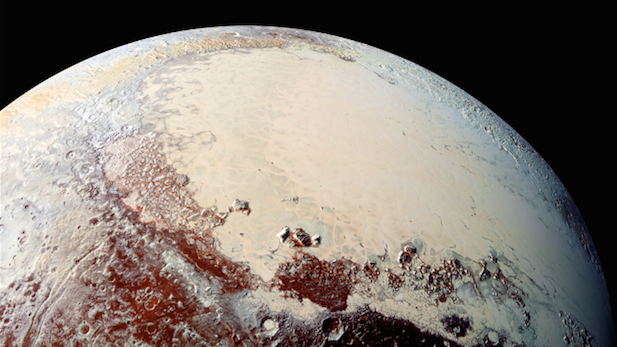 One region on the surface of the dwarf planet Pluto is “surprisingly young," less than 10 million years, a Northern Arizona University astronomer has reported.

Astronomer David Trilling authored a study about his examination of a smooth region on Pluto called Sputnik Planum, which was photographed by NASA’s New Horizons mission last July. Trilling said the lack of craters was a surprise.

He calculated how often Pluto should receive impacts from outer space, “and we did some math using our knowledge of the outer solar system, and concluded that that region of Plut, the surface has to be younger than 10 million years old,” he said.

That’s younger than some rocks in the Grand Canyon.

Trilling said scientists don’t yet know what kind of geologic activity erases the craters. Slabs of nitrogen ice might scrape over the surface, or icy volcanoes could erupt from underground.

The study was published last week in PLOS ONE, an online research journal.

Lowell Scientist Explains Red Splotch on Pluto’s Moon 'Mind-Boggling:' Pluto Fly-By Reveals Slushy Glaciers Scientists Celebrate First Close Up Pictures of Pluto
By posting comments, you agree to our
AZPM encourages comments, but comments that contain profanity, unrelated information, threats, libel, defamatory statements, obscenities, pornography or that violate the law are not allowed. Comments that promote commercial products or services are not allowed. Comments in violation of this policy will be removed. Continued posting of comments that violate this policy will result in the commenter being banned from the site.